When the Lord closes a door, somewhere he opens a window (*)

While trying to recover from the loss of my beloved cat Dice last week (Goodbye Dice 💔) and not being able to sleep I started looking through some of the animal rescue websites, pondering whether I wanted another tuxedo. Nothing called to me. Then a cat appeared on the website of the local county shelter. A tuxedo cat named Tom, about 1.5 years old and looking a bit scared. When they called to reschedule the appointment I made online, the person noted that I had expressed interest in Tom and asked if I was an experienced cat owner. And did I have children in the house. Hmmm. She said he’d been transferred from another county shelter, was withdrawn and maybe acting out, and not very affectionate.

So I went to the shelter with an open mind. A very kind person took me in to look at the cats. I looked around and there was Tom. Still looking like his photo. She opened the cage and the three of us regarded each other. He didn’t look mean. We talked to him and eventually reached in the cage and then eventually touched him. He seemed OK with that. We talked, I asked how he’d been to handle, she said she thought he was just scared, and that after talking with me she felt it would be a good match. A bit of a project perhaps.

Then I turned over my ID and waited. Ultimately they collected $5 from me (apparently there’s a special on cats this month) and gave me his paperwork. He was surrendered to the first shelter about five weeks ago, neutered, chipped, and vaccinated and then transferred to the second shelter the day before I saw his picture.

Go him home and set up in the bathroom with food and water, an igloo bed, a litter box, and a few toys. Kept going in and visiting and talking to him and then touched him. Mostly he stayed crouched on the floor or barricaded in the igloo. By the time I went to bed he would purr when I touched him. Now, two days in, I can pick him up and hold him and he will sit in my lap and purr (so much for the not affectionate cat). He appears to be a fully functional cat–eating, drinking, using the litter box, bathing himself, and finally tonight meowing for the first time. Is that a normal thing not to meow when they’re stressed?

As he’s come out of his shell he’s definitely more active and just plain busy, but in my experience that’s pretty normal for a teenaged male cat. The only vaguely wrong thing he’s done is what I’d call kitten biting but we’re working on that.

I will work on getting better photos. 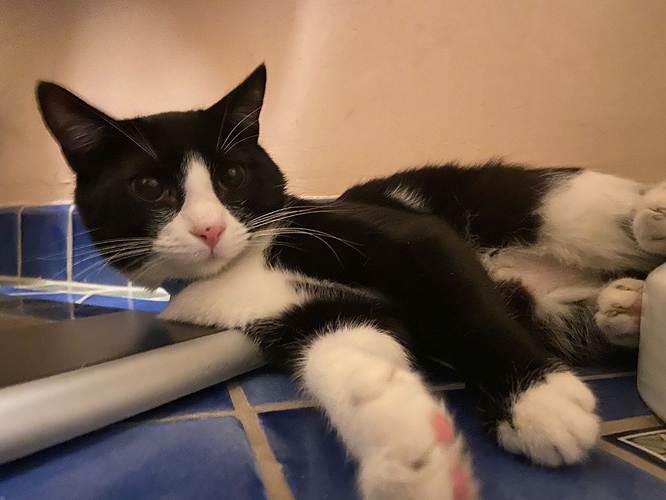 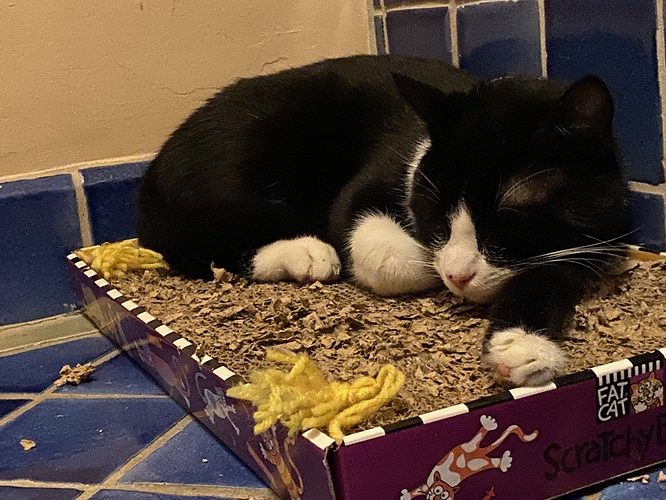 so happy for you and moreover for Tom!

Some get so stressed in the shelter environment they don’t show their personality at all. Sounds like he just needed someone to give him a chance.

I’ve found they become much more vocal when they feel comfortable and get comfy with me.

Six years ago I took an injured crow to the local HS and left with the “oldest cat in the shelter.” Herb. He was absolutely silent for about a month. Then he started to speak. He hasn’t shut up since. He chats every time someone walks into the kitchen. Herb has moved from “old” to “ancient” in the ensuing four years (likely 16 to 20, but who knows). He lives on the kitchen table for the most part —still in the cardboard box he came in from the HS ( cut it in half so it is kind of a cat bed --with a towel). At the time I thought he’d feel more at home when he first came if he had something familiar.

Occasionally he will join the two young queens for play dates with the cat toys in the cat room (sun room, skylights, trees, toys, etc). Usually he just hangs out on the kitchen table, looking like a meatloaf in his box.

Suspect your Tom will start to chat with you soon.

Welcome Home Tom ~ you two need one another !

Bless you for giving Tom his forever home ! ENJOY !

He wasn’t unfriendly. He was just looking for his Forever Mom. And now he has found her! Congrats to both of you!

Ah what a great way to start a morning- seeing this- I was almost afraid to read it.

So glad you and lonely Tom found each other. And he’s already a talker, lucky you!

No wonder he was withdrawn with all the ‘procedures’ he had done to him in such a short time and then be thrust into another shelter. Poor guy.
Hope you keep us involved in the evolution of Tom.
Great Job!!!

Congrats to you both! Tom’s got a great home, and though he may not completely recognize it now, he will in a few more days.

Cats get stressed so easily in shelter situations. I’ve seen some at the adoption compounds at Petco and PetSense that wouldn’t even look at you; they just wanted to hide. It takes everything in me not to scoop them up and take them home. . . so it doesn’t surprise me that he’s a bit reserved still.

Most of my cats don’t meow except in special situations. Ham will meow if he wants in my lap, or if it’s time to go to bed; Maximus will sometimes make an inquiry (“Am I hungry? Maybe? Should I know?”), and sometimes Nigel will chirp at me for food or attention, but the only one who really ‘talks’ to me is the Itty Bitty. Non-stop. (Man, the girl is non-stop!)

So it wouldn’t surprise me that he’s being quiet at all.

the lack of voice is entirely normal for this situation. Those dilated eyes say fear and stress. He looks like he needs consistency and stability. He may totally become the cat of the house or he may remain attached only to you and not present when company comes.

you sound like you have performed a mini- miracle in a short time.

look at those gorgeous pink bean toes in white mittens! He’s got big shoes to fill, but I’m sure Tom will absolutely bloom in your care.

re: meowing I’ve seen some meow/wail when stressed and other go completely silent as to not draw attention to themselves. I’m sure he will open up as he gets accustomed to his new life. Right now he can’t believe his good fortune - he won the cat lottery!

Thanks everyone! I think he’s going to be a total sweetheart. I’ve been pleasantly surprised at the progress. It makes me sad when he hides behind the toilet every time I come in, but he emerges pretty quickly now.

Time and patience I have. Some neighbors want to visit but that can wait until he gets more settled in.

@hoopoe You should see his shelter photo. Cute but very scared. But it got me to want another cat sooner, as opposed to later.

This was taken a few minutes ago. 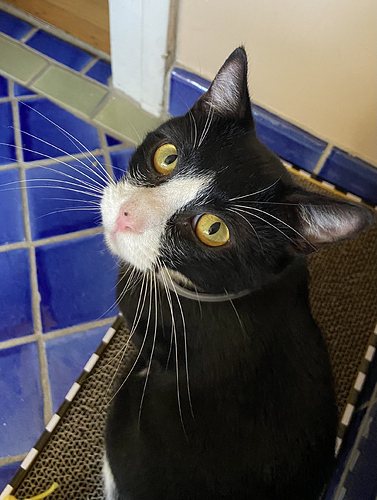 Such a handsome boy! Thank you for taking him in and giving him the love he clearly needed.
Tuxies are very smart and I have no doubt this boy’s true purrsonality will emerge soon.
Give him a kiss for me.

It makes me sad when he hides behind the toilet every time I come in, but he emerges pretty quickly now.

My youngest cat has been with us just over a year now, and if we come into the house wearing shoes, he will still run like h#ll and dive under the recliner.

The fact Tom has come so far in only a handful of days is nothing short of amazing!

He’ll come around. He’s young and it hasn’t been long and he’s already made some progress. You two will have a lot of happy years together. Do you still have the taco truck? If so, I hope Tom will like it as much as Dice did.

. Do you still have the taco truck? If so, I hope Tom will like it as much as Dice did.

Yes. Hopefully Tom will take over as taco truck proprietor. He hasn’t seen it yet as it’s a bit large for my small bathroom plus hallway which currently has litter box plus bed plus igloo plus food and water bowls plus scratching thing plus a few small toys.

Congratulations from another SoCal girl. He looks absolutely precious. My husband and I had two tuxedos (adopted from our barn). They do have great personalities and are so intelligent. Sending happy hugs to both of you for a long, happy life together!!

What a good kitty. I love black and white cats. Most affectionate creatures.

Golden eyes and a freckle

Yes, I think we have a new taco truck proprietor. I added the hall and then the bedroom to his range and tonight added the study, mostly to introduce him to my photo class group on Zoom.

He spend a fair amount of time earlier today under the bed or in the cave formed between the headboard and the wall. But is now happily hopping into my lap, staying to purr for a bit, and then going off to explore. He seems to be a lovely affectionate cat. 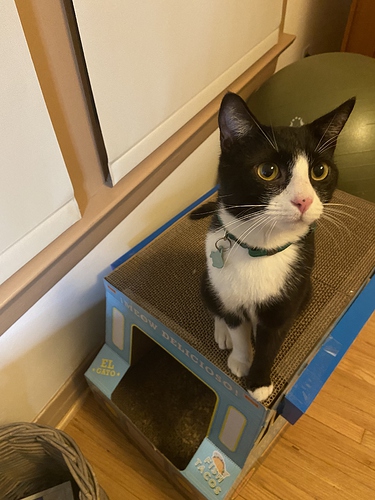