So, it appears that Tom the cat is a high pee-er (how do you spell that??). Current litter box is one of the Nature’s Miracle ones with specs that include 11" high. It is about half an inch too low based on recent observation.

I found this Modkat one that seems pricey, though the reviews are generally good. It is covered, but the lid flips back. Anyone used one? Do you really need the liners?

Or do I just go to Target and try to find a smooth-sided storage container and modify it?

Any other ideas? And do I panic that this is a sign of some sort of medical issue? I hadn’t observed it before, but the area under the box has been damp on occasion. It’s in a bathtub under the tap so I assumed some water had leaked out somehow. Based on today’s cleanup, his urine isn’t massively stinky, as cat urine goes. 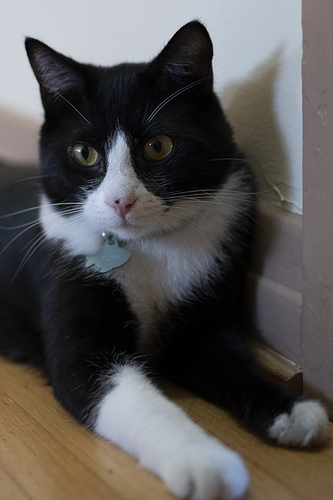 The next time I need a litter box, I’m going to Home Depot and get big storage containers and cut a hole in the short side. Tall enough and long enough for my cat. I just won’t use the lids because I don’t like covered boxes.

I use storage totes. I have a high pee-er too.

Here is my set up. 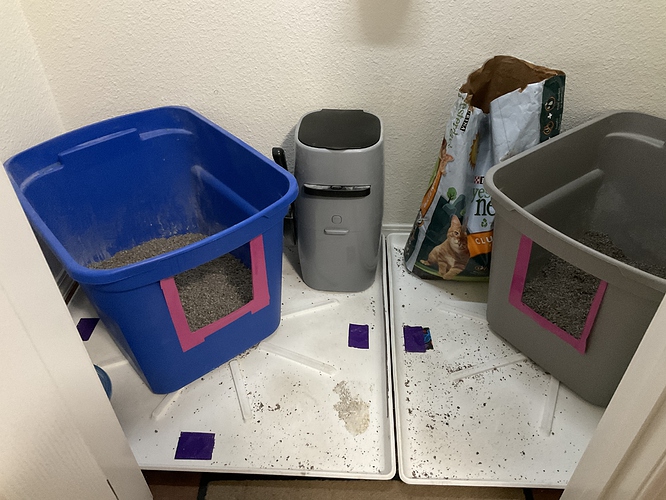 I think mine are Sterilite. They don’t have all the little ledges and recesses that Rubbermaid has to make cleaning frustrating. I found if I cut the hole on the long side, I still had many misses. I think putting the hole on the short side allows him room to totally get comfortably in and he seldom hits the hole.

Those Modcat boxes are pricey. I had one (the flip) and got a little out of it via a yard sale. I like my totes.
Susan

I’d try the storage container first. I don’t LOVE them because it’s so hard to find one with a smooth bottom, they all seem to have a moat? But it’s not a deal killer, just an annoyance.

How old is Tom? If this is a new thing, he might have some arthritis that makes it uncomfortable for him to squat. Cosequin is cheap & easy and might help. (It can also have positive effects on their urinary health, win win!)

He’s not quite two.

He’s been amazing about the box, especially after a cat who wasn’t. That one got daily Trixyn.

If you can get one, the airport TSA totes work great. I use one for my foster mamas and kittens, once they’re big enough.

Our two boy cats have a competition for how high they can pee. We use the yoda house looking thing. Works great because the top overlaps the bottom and it keeps dogs from turd surfing for Tootsie Rolls.

You can get them on Amazon.

Boys and their high peeing!

My set up is just like Kyrabee, I turn the opening towards the wall to discourage rocket launching litter as he exits the box (he has about 8 inches and a hard left to get out of the box. I also use the Blackhole cat liter mat trapper to further stop the liter spray which all sits on a washing machine drain tray. … AND using a good quality clumping liter is key. I like Worlds Best.

I use the lids. I dont see an issue with it unless you all can tell me otherwise. I clean the box twice a day and their is only one cat.

I use a good size kiddie (now kitty!) pool for my three cats. I have one elderly male who prefers to assume the high spray position if he can, and another make who loves to dig and scratch with great vigor. The kiddie pool has high enough sides and is spacious enough that all three could use it at the same time. As if lol.

I used to use storage tubs and didn’t cut a door in the side for them so they had to jump into them (because my black and white boy cat stands to pee, too - and I didn’t want him peeing out the door in the side).

I switched to these and they are perfect for my 2 cats - I have 3 of them. They have no problem (for now) jumping up on top and going in the hole. My girl cat even had to wear a neck donut after some eye surgery and could get in and out fine.

Your kitty is very handsome!!

For those of you making these out of storage bins - how do you cut it the entry door? Do you need a dremmel or is an X-acto knife strong enough for the job?

I used tin snips, which are basically giant scissors:

You could also use a jigsaw or other cutting power tool.

The clear sterilite tubs kinda shatter a little, but nothing a little gorilla tape to bind that cut edge doesn’t solve.

I used tubs for years and years but switched to the xl cat pans (like in the OP, or this one: https://www.petco.com/shop/en/petcostore/product/so-phresh-tan-scatter-shield-high-back-litter-box-for-cat) because they’re deep enough for my kitties & easier to clean with the smooth bottoms.

good call on the tin snips. I’m toying with making a feral cat shelter as I’ve found a few patterns that involve the rubbermaid storage bins, and always wondered how you succeed in cutting those without taking a whole finger off! I’m not handy at all and don’t have many tools, so a cheap, non-power tool method like tin snips is appealing.

Thinking about it, a small saw might be an even better option, and skip that little shatter with the snips. Something like this?

I just use a good sharp blade in a box cutter. I roughly mark the hole I want with a Sharpie. These last ones I got are pretty thin and it doesn’t take much.

I love my top entry litter boxes. I’ve been using them for like a decade because I have one cat who stands while she’s peeing. I, too, had my girl in a giant E-collar for a while, and she had no issues whatsoever. I leave the tops off sometimes when I have cleaned them, and she’s also happy to use them totally open top. Mine is 13 and definitely not having any issues with it, and I have two others living with family when my girl decided to attack them. One of those is 14 with pectus excavatum and has no issues.

Thank you everyone. Some great options here. I notice that Target has the Sterelite containers and I have a gift card from returning the impossible-to-assemble Christmas Tree Cat Scratcher.

I’ve used large storage tubs for many years and I have never cut a door in them.

I used a box cutter. it was easy peasy.

I cut a door in the short side because my cat is a klutz and NOT graceful. He can’t jump. He climbs up the side of the bed, and flops off when he wants to get down.

He is the product of a poorly bred, kitty mill, siamese cat farm. Roached back, cow hocked and sickle hocked with splayed feet at the same time. I have no clue how he acutally moves in a straight line.