Hip replacement surgery & getting back on

So, getting a new hip tomorrow and another in 4 weeks. What was an average timeline for getting back in the saddle? Thankfully I have a safe schoolmaster when it’s time to return. Hearing different recovery plans from individuals but none from true horse people. Any insight would be appreciated.

Best time to start riding again is when your doctor/physical therapist says it is. But from my own experience with a hip replacement --one month to six weeks. I could mount without help after one month, but was still using crutches to get around on the ground. I could ride comfortably and safely at six weeks.

One of the whippers in at the hunt club was back in the saddle at two weeks (14 days). But she’s a doctor so I guess she gave herself permission.

The problem as my DR explained it to my pea brain isn’t that you CAN’T its that if you injure the hip/hip socket/thigh implant, you may well be in a wheelchair the rest of your life. The pelvis can only take so much repairing before there isn’t enough bone left to repair. So should you fall and break the new hip socket, or the thigh implant, or your thigh bone, how exactly will they repair that? After six weeks or so, I was told your new hip is stronger than a “real” one --so good go --but until then, play it safe. All this is from what I recall from my DR --and that was about 6 years ago, things may be different now.

Thanks so much for the great info!!!

I had a right hip replacement using the Superpath approach. No muscles cut so minimal restrictions. I was back on my horse at 4 1/2 weeks. I always use a mounting block and I mounted from the right side (as I had pre-op due to the pain from lifting the right leg). I do a couple weeks of all walk then went back to work (lower level dressage).

I’m having the anterior approach, unfortunately not the Superpath. Guess mine might take awhile longer to recover from.

One of our friends at the barn had a tough row to hoe. She was in her 50s. She was riding in the indoor when her mare planted her feet at the trot and stopped. Rider went flying and when she hit the ground her hip broke. The recovery didn’t go well because of the type and magnitude of the injuries. They replaced the hip. Things were going reasonably well until there was problem with the implant and it had to be replaced.

Obviously she had a long recovery. It was tough watching her making her way around the barn with crutches and canes. She didn’t ride for quite a while but followed doctor’s orders without cheating. There is a therapeutic riding program at the barn with a large platform that is wheelchair accessible. Almost everyone uses it to mount and a few of us older types use it to dismount. I don’t remember the timelines, but she did exactly what the doctor ordered and it has paid off.

It was at least 10 years ago. She shows no, absolutely zero evidence of any lingering problems. She confirmed her DH was in fact out and about. She got a divorce. She went back to work, and is now retired.

She was back to riding. She showed up at the barn one Saturday morning with her next BFF. The place was abuzz! Where did she find him? They are still together and have added several horses.
They took up carriage driving competitively, sold the house and moved to the second home. They added a few more horses and a cow. She still has that mare and has ridden her.

Our farrier had back problems. They got bad enough that she finally went to a doctor. It was her hip and it needed replacement. They told her 6 weeks. She had everyone’s feet taken care of before surgery. She counted out six weeks, put us in as #1 just in case and scheduled everyone. She started going to the beach and walking in the water which helped with recovery. We’re in southern Maine and there are some nice swimming holes if you know where to look. Any aches and pains these days are due to aging.

There is a great website - Hip Replacement for Horse Riders -check it out, it’s international. I’ve had both done, rode after 8 weeks each time. Started walk trot and added canter after two more weeks. The relief from pain is amazing! I used a stationary bike after 3 weeks at lower levels to keep everything moving.

There are several threads on this particular bulletin board topic on hip replacements. The time it takes for someone to feel comfortable riding again varies tremendously. I’ve had both of my hip joints replaced (anterior) within a 3 year span (genetic thing, thanks mom and dad). With both replacements, I did 8 weeks of PT, 3 times a week plus at home exercises in between PT sessions. I still do a daily routine of exercises to keep all the soft tissue components flexible. Good, consistent PT is essential. With the first replacement, I was riding after 4 weeks. With the second, more like 12 weeks. My surgeon simply said to start riding again when I felt comfortable.

Thanks for all of the great input! In my room now, the pain is with the incision not the hip. I’ve been up and walking some.

Had my hip done, anterior, 8 years ago. They started PT in the hospital and I went to PT 3 days a week for 6 weeks. PT included recumbent bike, later elliptical, for warm-up and went from there. I really think that was critical to healing well. IIRC, I started riding when doc said OK, 6 weeks out. I have never had one bit of trouble with the hip. The respite from pain was immediate following surgery, I never used crutches or the walker, used a cane briefly.

You will be so glad you did this!!

Had the second hip done 3 weeks ago, this one went horribly wrong. (3) separate hips had to be installed in the OR, 2 failed and dislocated while he was checking leg length. I ended up with an older model which is round and a very deep cup installed with a screw. This recovery will be slower and longer. 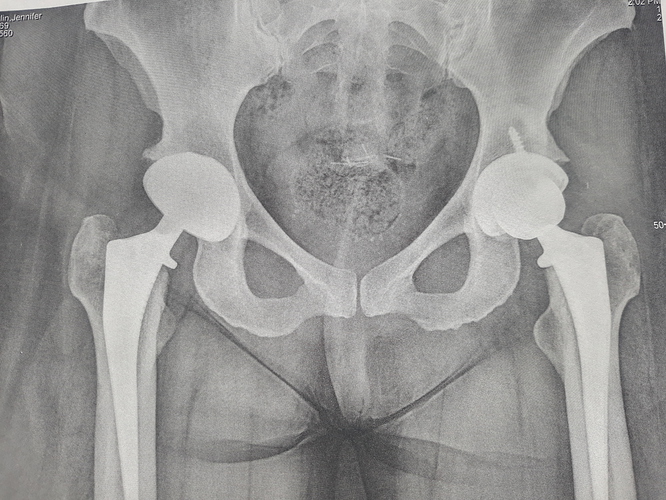 Ouch, sorry you had such a bear with the second one, hope it gives you a great result when healed.

So sorry that the second hip joint replacement did not go well. I hope your recovery goes smoothly and that you will be back in the saddle soon!

I had one hip done 12 years ago and was on my horse at 6 weeks. Now I am having the second one done. I’m not so worried about riding. My horse hasn’t had a vacation in 9 years. I know she will be fine. How about daily barn chores. I have friends pitching in but how soon did you feel comfortable bringing horses in and outside? Picking stalls? I guess I’ll just play it by ear but as my doc reminds me, I am having major surgery. Great to hear all the positive stories!

I definitely have issues walking on grass and uneven surfaces. Good luck with your upcoming surgery.

I was able to mount and dismount with ease and ride a little walk, trot, and canter on two horses with absolutely no pain.

As noted already, it varies for people and frankly surgeon. My surgery was done by a sports medicine doc instead of a geriatric one so he totally understood my goals. I’ve been “released” with no restrictions and have another check up in 2 months.

I need to have my hip replaced. No surgery date yet. I am happy to hear back in the saddle by 6 weeks, with the normal provision of doing what you are told.

I have been on the horse but I would not say truly riding for quite awhile now.
Does not help that he is over 18 hands. We have a mounting block that works for getting on, but the getting off is more difficult.

I was cleared at 6 weeks on August 30th after my 2nd hip replacement surgery this summer. I’m actually showing this weekend, but building back the stamina has been the toughest part. Also, my dressage saddle cantle is pretty tall, which makes for a very interesting dismount.

Good luck with your upcoming surgery, it’s definitely well worth it.