This was a part of the article here on COTH, regarding the suspension of an FEI level dressage rider:

"The FEI Tribunal report included expert testimony from FEI Veterinary Director Dr. Göran Akerström on the size difference between rider and pony. His testimony indicated the pony was carrying an estimated 34% of his body weight when da Silva was on him, far beyond a veterinary recommendation that horses carry no more than 15% of their own body weight for longer rides.

“[This] must be considered as an extreme overload that would cause unnecessary discomfort, even for a short period of time,” the Tribunal’s report stated. “The effect of the overload is, moreover, exacerbated by the very aggressive riding, the high position of the pony’s head, as well as the rider jabbing the pony’s mouth with the bit.”

I am not sure what a “longer ride” is. However, if you do the math, a 1200 pound horse should not carry a rider weighing more than 180 pounds. I know that there is the whole “fat shaming” issue that we’ve run into here on COTH, but these are the facts, according to the experts.

Any thoughts from the COTHers regarding this? Yes, we know that the guy was a jerk. Poor pony!

I don’t agree with a strict 15% rule, too many other factors. I’ve seen many a thick built 14.2 quarter horse carry weight better than a 17 hand thin built TB that outweighs the quarter horse. Plus beginner weight vs a rider who has amazing balance matters.

To many variables on bone density and fitness to make an absolute statement like that.

But yes, that trainer/rider was a total douche to ride the pony that way. And I think they used what they could to suspend him.

I had issues with a surgeon not wanting to do an ACL reconstruction because I was fat. 5’4" and 210 at the time. He wanted to remove the ACL, which was in the way, shave the torn meniscus and see how I did. If I had instability then he would go back at a later date and perform the ACL surgery. He didn’t think I was up to doing the PT for the ACL reconstruction and was really active enough to need the ACL. I didn’t want to go through anesthesia twice. He apparently didn’t think fat people co…

I found that comment interesting too. It’s the first time (that I can recall) hearing 15% as a general rule. Usually people say 20-25% is the general rule of weight limit.

I believe I read a study once that said 25% was when horses started showing signs of extra stress when carrying a rider. At 20% they remained “comfortable,” whatever that means. However, it’s important to consider rider skill and fitness level (weight does NOT equal fitness, and muscle weighs more than fat.). A highly skilled and balanced rider at 25% of their horse’s weight is probably still an easier load to carry than a true beginner bouncing around at 20% of the horse’s weight.

However, pretty freaking obvious in that video that dude is abusively too large for that pony.

Recognizing that a horse must be appropriate for its rider’s weight is not fat shaming. And I say this as a fat person.

The ratio of rider weight to horse weight is a useful guideline, but it shouldn’t be taken as a hard and fast rule. There are some short, sturdy QH and cobs who could carry my weight better than a very tall, long backed, weak-loined horse, even though the taller one might be heavier. Size, conformation, and fitness of the horse all play a role. And of course rider balance and skill does as well.

20% might be fine for some horses and too much for others. 15% might be too low, 25% might be too high. It’s something riders should have honest discussions with their vets and trainers about.

As for the guy in the video? Nothing to do with fat and everything to do with being a macho, abusive, douche taking out his temper on a defenceless animal. Wish he could have been suspended for life.

My anecdotal observation is that the British tend to be more conservative re the rider weight % than Americans & (usually) Europeans. Americans usually say 20% . I’ve regularly seen as low as 10% argued by British members of one FB page I belong to. 10% seems nutty low to me. That would put a 110 lbs jockey with 1 lbs racing saddle over the limit on the average TB. 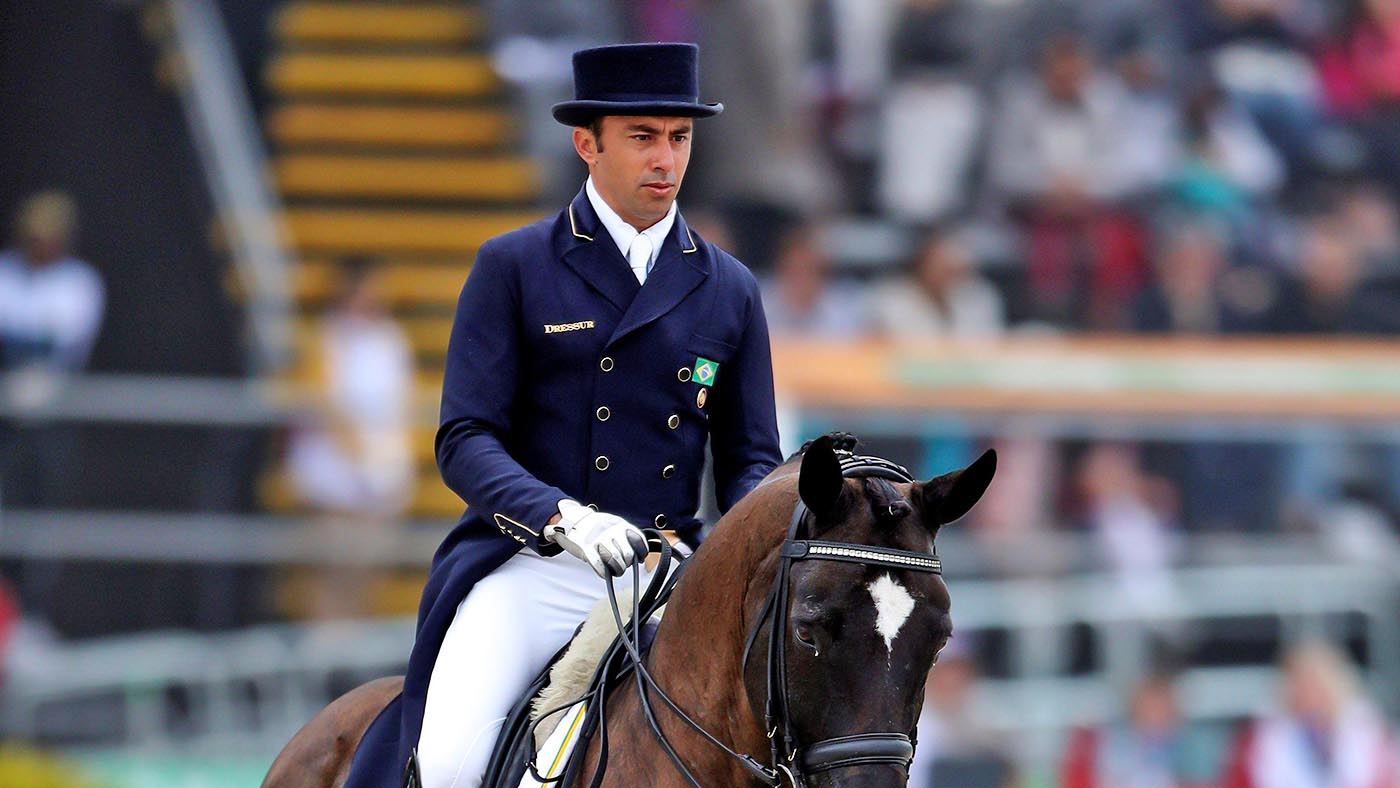 OH DEAR… I don’t even need to watch it, just the still screen on it is bad enough. Poor pony.

eta: ok, I watched it. Forget the weight even, did he draw blood in that poor thing’s mouth?

And, FWIW, just look at the men riding the reining/cutting horses.

I don’t know if there are long term studies on that, but particularly the cutting horses can be TINY.

She is controversial in her delivery, but here is Dr. Deb Bennett’s views on rider’s weight and horses’ welfare:

We have discussed the topic of “how much weight a horse can bear on its back” a number of times here. The basic rules and concepts are:

These are the truths that I can share with you concerning rider weight and the horse’s weight-bearing abilities. I am not lecturing anybody to lose weight. What I am doing is reminding you that not everyone is cut out to be a rider; there is a limit above which we cannot go and still claim that we care about horses’ welfare. There are plenty of satisfying high-skill activities around horses other than riding, which makes it even more wrong to use these beautiful animals as vehicles to fulfill an unattainable fantasy. – Dr. Deb

which is one of breed characteristic of a Lippitt Morgan

The back of the Baroque horse (as well as the Lippitt) should be short and
broad owing to well-sprung ribs. The coupling of the hindquarters at the
point of the loins is strong and short

Gawd! That was horrible! And I suspect it was his 20 year old son filming and laughing…? Find someone more the pony’s size to discipline it for goodness sakes! And “half-halt”? I think not!

" The technique used was called ‘half-halt’, i.e. that ‘the commands were obeyed when the animal was ridden by the children’."

There is something really wrong with any one who would do what was done to that pony.

I am a firm believer that a good pony is worth their weight in gold, and a bad one isn’t worth the lead in the slug, but even if the pony had been bad, he sure as certain didn’t deserve that.

I know that there is the whole “fat shaming” issue that we’ve run into here on COTH, but these are the facts, according to the experts.

This was always a standard as I grew up with horses. The problem is that our culture has changed, our lifestyles have changed, out activity levels have changed drastically for the majority and most importantly our eating habits have changed.

We are a fat nation. If you look around when shopping the vast majority of the people are significantly overweight. It is not “fat shaming” to protect our horses from having to carry riders that weigh too much for them to safely do so.

I have a good friend who manages a therapeutic riding program. One of the significant challenges they deal with is that many of the students that come in are overweight. Sometimes significantly. They search for short, stout horses and ponies that can carry these people safely, and hold up. It is not an easy task to find these horses.

It is not “fat shaming” to protect our horses from having to carry riders that weigh too much for them to safely do so.

I guess there could be governmental restrictions limiting the size of saddles. The airlines sort of have by reduction of the standard seat size (I remember back in the old days the airlines had scales to weigh the passengers …in front of the world to see.

It is interesting, because you can’t always tell the weight of someone by looking at them, particularly if they are a taller person. And so when I see these threads I always cringe a little bit, because I know that there will be some public shaming of people based on people’s eye.

Add a western saddle, and the first and 2nd example no one (nor really many horses) will bat an eye at. But the last example will cause people to look askance even though she’s 10 lbs lighter. And if she dares post a picture on social media, whoo dog. (None of these people are riders so far as I know, I was just using them as examples, and I picked the weight at random, based on using a western saddle).

But yeah, that guy is a jerk. It definitely doesn’t excuse him.

Here’s the problem. A short person, with short round legs has a whole different way of sitting on a horse. And, it is not easy for them to unweight their thigh, and let a horse lift underneath of them, especially unless they are really an experienced rider. So, when they go to close their leg to hold on, they do it from the thigh down, and the result can be really challenging. I had a student who was a really good rider, balanced and talented, but if she closed her thigh on a sensitive horse, she could chase them right out from under her. The effect was like a nutcracker on a horses back.

Leg length is an issue. In general, given average weight, riders with longer legs relative to their torso balance better than ones with shorter legs. Most really good riders have a basically athletic body even after they put on a bit of middle aged spread.

I see enough petite or slim riders break down their horses through poor training choices. I’m not sure a heavier rider who could ride correctly is any worse for rgev horse.