I know a few members on here have extensive experience with this breed.
It’s a breed that’s always been on my “wish list” & I feel I’m getting to a place in life, in which I could entertain the idea of getting one.
Looking for recommendations on breeders & if there any type of split within the breed based on type? like the show/working types in GSDs & Labs.

Any other additional advice is welcomed.

I do have experience with hunting breeds (mostly Labs & spaniels).
I also have bred, raised/trained & compete with working line GSDs for the past 15 years.
I also did “pet OB” classes for quite some time, so have dealt with a wide array of breeds there.

A friend has a couple of rescues right now after having a half dozen or so over the years.
From what I’ve observed: First off, sadly they are very short lived. Seems like 6-7 yrs. is common.
Her dogs seem to just do their own thing on her small farm. If you’re accustomed to GSDs,
wolfhounds are a whole 'nother thing. Obedience? haha.
Like other large hounds, they like to run. And run away. Must be well confined.
They ARE cute to look at w/ their scruffy faces, but I just can’t understand the attraction.

My SIL had one: he used to silently greet every visitor at the front door which I suspect was disconcerting to some people. He was very dignified and very large. They do occupy a HUGE amount of space wherever they are. In a vehicle, walking down a street, in the house, it is like having a small pony with you - 9 or 10 hh perhaps. Dispite their apparently relaxed nature, they do require a good deal of exercise to stay happy and healthy. A dog for someone with time, experience of dogs (they can be sensitive souls) and a lot of space. Nice people to have around.

They are lovely, larrrrrge, and too short lived. My cousin had one who liked to sunbathe at the top of their driveway in a posh Atlanta suburb. Before they got Tiny, lookie-lous would drive down the drive to snoop around. Funny how a massive Gothic looking creature like Tiny put a stop to all of that. She was a sweet, kind thing.

I know a few members on here have extensive experience with this breed.
It’s a breed that’s always been on my “wish list” & I feel I’m getting to a place in life, in which I could entertain the idea of getting one.

@houndhill is an IW breeder. Hopefully she will see this post and help you out.

One thing I know is that good breeders place them very carefully because they tend to have small litters considering their size. I believe most good breeders are affiliated with the national breed club https://www.iwclubofamerica.org/finding-irish-wolfhound-puppy

The short life bothers me. Scottish Deerhounds are gorgeous and they are posted at 8-11 yrs.

The short life bothers me. Scottish Deerhounds are gorgeous and they are posted at 8-11 yrs.

I don’t know much about the SD…
are they similar to the IW?

Scottish Deer Hounds are not quite as tall and solid as the IWH. They are still tall but a bit more greyhound in shape. Again, nice people but, same as the IWH, they occupy A LOT of space and need a good deal of exercise. I meet one regularly in town and he is polite to other dogs and strange people. He graciously accepts a rub on his head and I don’t have to reach down to him at all - I’m 5’ 9". Think 2 seater sofa with one sprawled dog filling it.

Both breeds are unusual but I see more deerhounds than wolfhounds, here on my rainy Atlantic island, which suggests deerhound are easier to have around.

Both breeds are unusual but I see more deerhounds than wolfhounds, here on my rainy Atlantic island, which suggests deerhound are easier to have around.

I would not assume it is related to temperament. Both breeds are known to be extremely gentle and biddable. It could be just an anomaly in your area - I can’t think of anytime I’ve seen either breed in my area except at a dog show. Neither is popular but the Deerhound is pretty rare, at least according to AKC.

They are coursing breeds so there is more than the large dog by the fireplace image.

Both breeds are known to be extremely gentle and biddable.
[/quote]

Well, maybe not the best choice of words. I was going to say “friendly” and it is true that many are, but not in the same way my Brittanys are “friendly” (as in, they will get in your car and want to go home with you.) I meant that I think both breeds are good pets - calm temperament, docile, polite. I have never heard that IW are more difficult than SDs, for example. Someone very familiar with both breeds might be able to weigh in more on that subject.

When I was showing dogs back in the late 70s, I worked for a professional handler who specialized in sighthounds. We had multiple Wolfhounds in our string through the years and they were easy dogs to travel with and show (although they did take up a LOT of room in the van!).

I also became pretty good friends with one of our Wolfhound clients whose daughter was involved in pony club and combined training and rode with the same trainer I rode with. I spent a lot of time at their place, where I interacted with the Wolfhounds even more. Although they could be a tad aloof with people they didn’t know, they were in general good-natured and kind-hearted souls that were very easy to be around. The bitches could be a bit more keen–more alert and “sharper” in temperament (but not nasty or aggressive in any way)–while the males tended to be big lovable goofballs. Bear in mind these dogs were all carefully raised and socialized in a household full of very stable-minded dogs, and they had very good direction from the humans in their life so they grew up to be very even-tempered and mellow. I thought they were just wonderful dogs and was often tempted to get one of the puppies but I had a small car at the time and several Salukis and Afghan Hounds of my own, so it was too impractical for me to get a Wolfie.

We also had a few Scottish Deerhounds in our show string, and I have been totally smitten by the breed ever since. They are similar to Wolfhounds but are slimmer, not as tall or with quite as much substance, and have the same quiet, dignified demeanor (although can fire up if there is something that needs to be chased). There is one out there showing right now named Foxcliffe Claire Randall Fraser that to me, is the epitome of a Deerhound–so stylish, elegant, and regal that she almost takes my breath away even watching her on television. She won Best in Show at last fall’s National Dog Show and comes from a dream motherline–her mother was named Reserve BIS at the 2015 National Dog Show and her grandmother won BIS at Westminster some years earlier. If I wasn’t at a point in my life where I was restricted to only small dogs, I would be champing at the bit to get one of Claire’s puppies or a near relative! 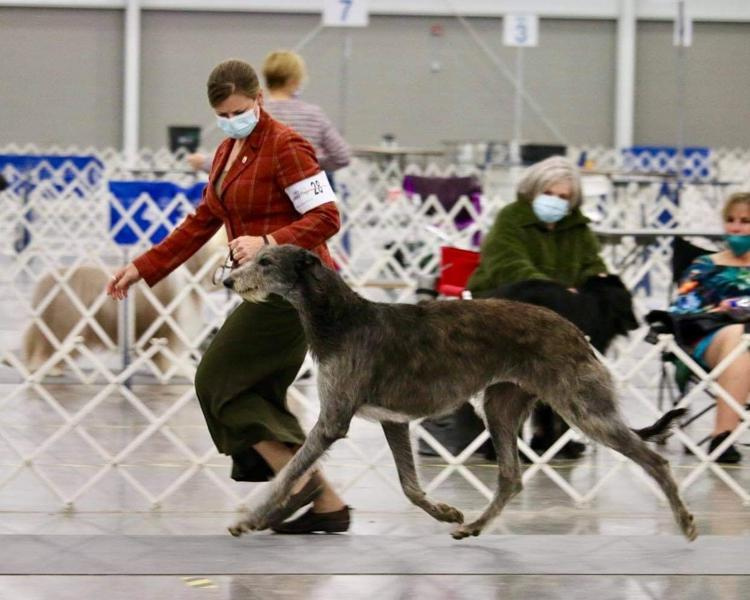 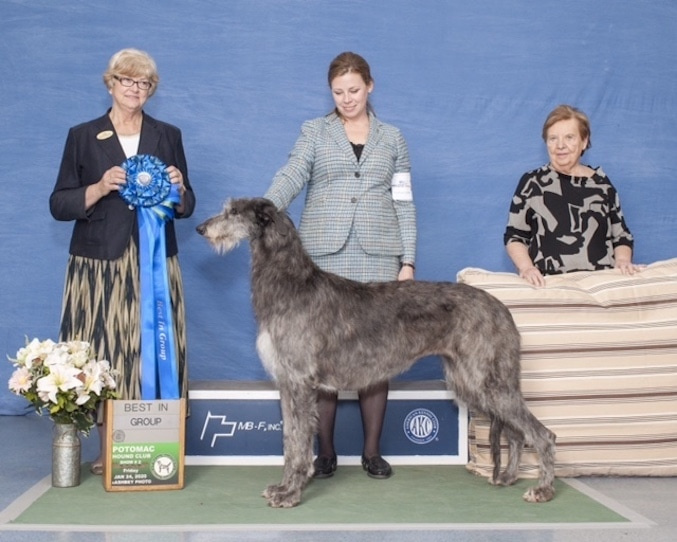 Claire - so correct in conformation and movement, so typey, so majestic.

Be still, my heart!

Today in town met an IWH. His human and I stopped to talk. Dog took the opportunity to lie down in the street (nominally traffic free) sprawled on his side. His human said “He is only young but really, really lazy”. I gave the dog a rub on his ribs, which he politely acknowledged with an energic phantom-scratch leg wave. Unfortunately, along came a van. Road partially blocked by sprawled dog. His human, expending a lot of effort, literally dragged him out of the way by means of his harness but Dog was not getting up. His human appeared slightly fraught: Dog collapsed back on to it’s side with a contented sigh. There was a fair amount of humorous comment from other pedestrians passing this enormous, inert, heap of dog. Then came another van that passed, very slowly, about 6 inches from its tail. Dog decided the vans were being very rude and so got to its feet. His human took the opportunity to get up some momentum and quickly left, looking like a tug boat pulling a cruise liner.

I know someone who used to work for a vet clinic. He told me there was an owner that had 3 IWH’s. The dogs were brought to the clinic multiple times (and sometimes had to have surgery) because they ate things like paper towels, underwear, etc. I don’t know if that’s something that IWH’s do or if it was more of an owner problem.

I’m a Scottish Deerhound breeder. I agree with DownYonder as far as differences between the two breeds. The Deerhound is quite a bit smaller, more athletic and longer lived than the IW. Deerhounds range from 80 to 110 lbs and run up to 28 mph. The average lifespan is 10-12 years - typically longer for females.

This is a 15 month old girl from my last litter. 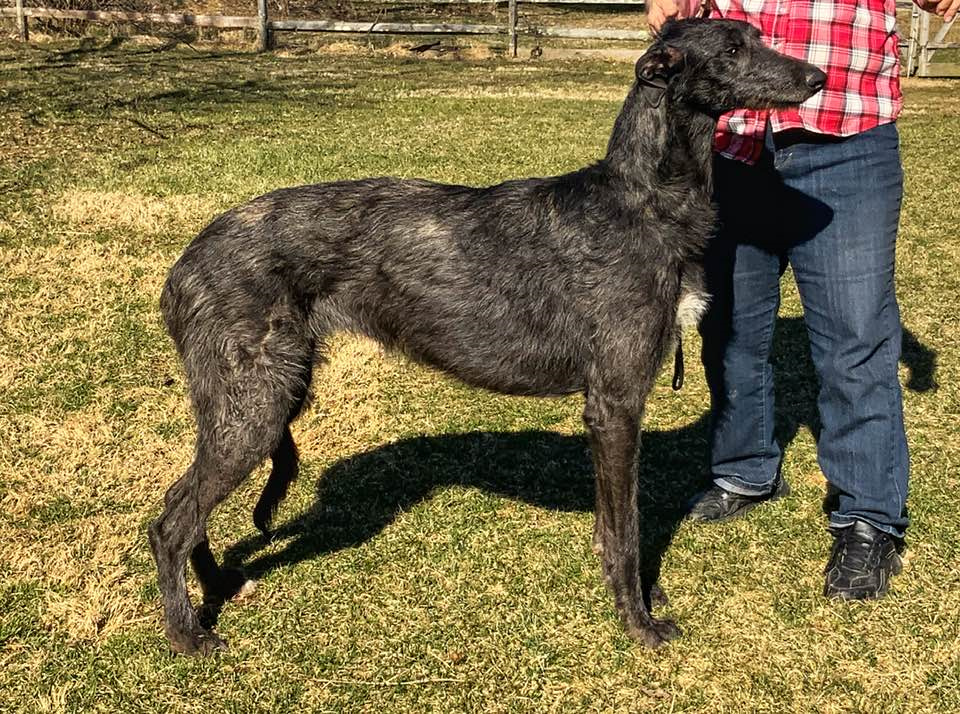 I’m a Scottish Deerhound breeder. I agree with DownYonder as far as differences between the two breeds. The Deerhound is quite a bit smaller, more athletic and longer lived than the IW. Deerhounds range from 80 to 110 lbs and run up to 28 mph. The average lifespan is 10-12 years - typically longer for females.

Awww. I love sighthounds. I’ve had two rescue racers, and they were great. The local greyhound rescue is having trouble finding ones that are cat/small-dog safe. She suspects they are breeding selectively for more prey drive. I have cats, so I probably won’t get another rescue greyhound.

Maybe sometime in the future I’ll get a Scottish deerhound.

Awww. I love sighthounds. I’ve had two rescue racers, and they were great. The local greyhound rescue is having trouble finding ones that are cat/small-dog safe.

I’ve never in my life met a greyhound that was cat/small dog safe outside the house! Not a recent problem. I’m getting on in years.