Is this trailer too heavy?

Looked at a 4 Star 2 horse BP yesterday-was really excited to find such a quality brand used trailer so close to home. Has everything I could want/need-except it is HEAVY. It’s empty weight is 3900 lbs which seems like a lot for an all aluminum trailer.

I tend to overthink things but want to be safe-just looking for some outside opinions. Thanks.

I don’t think that it will be too heavy for you. Some weight to a trailer is a good thing, will give a better ride than a very light trailer. Get anti sway bars for the hitch, if they are not already installed.

It sounds like you are well within your truck’s towing specs, even when fully loaded. I would highly recommend the WD hitch and sway bars. They make a huge difference!

You cannot beat the quality of a 4Star, and if it seems heavy, it is because it is well built.

You need to find out the max weight the bumper hitch your truck can take, and it would be helpful to know the exact max towing capacity of YOUR truck (not a generic similar model F150). The decoded vin will probably tell you these specs. It’s probably fine, especially if you get a WDH with sway control. But all trucks are different, and some have a bumper weight limit that is lower than you think!!

The specs I gave are for my exact truck. Edit: bumper weight limit is 10,500 with WD hitch.

That is a really high high weight for a 2 horse bumper pull. Even for a 4-Star, which typically are towards the weighty end of the scale.

Could you post the model information please? I’d like to look up and read more about this behemoth.

But as you will not be using it for two horses, you should be fine with your 1/2 ton pickup.

It’s a 2 horse straight load, I’m assuming considered their WB size (7’6 tall and 6’6 wide) with a larger dressing room, full double rear doors and ramp-maybe that’s where the extra weight comes from? I did not measure chest to butt inside the stalls but they looked a bit longer than average.

I think you mean the max towing capacity is 10,500 with the WDH. The max bumper weight or tongue weight would be in the three or four (not five) digit range.

You have to think about your towing capacity in two dimensions - forward and braking is your 10,500 limit, but the pressure down on your hitch, exerted by the trailer’s coupler, will be a much smaller number. That is the trailer’s tongue weight, which (depending on who you ask) is about 15-25% of your FULLY LOADED trailer weight. So assume your trailer is 3900, your horse is 1200, and your gear + misc is another 500 (hay, water, shavings, tack), you have an estimated loaded trailer weight of 5,600 lbs. Take 20% of that (depending on how the weight of your trailer is distributed) - which is 1,120 lbs - and that is your tongue weight. You need to make sure your truck’s bumper can handle a tongue weight of 1,120 lbs. The max tongue weight number goes up when you use a WDH, provided it is properly installed.

Probably doable for your truck, but best to run the numbers to be sure. If possible, best to get your trailer weighed and get the actual tongue weight to be double sure, but that is not often feasible before you have purchased the trailer

edit: here’s a forum discussing tongue weights for the F150 (just from a random google, not saying this applies to your situation): https://www.f150forum.com/f82/why-f-150-tongue-weight-capacity-so-low-431807/

Thanks-you are correct-the tongue weight limit with WD hitch is 1,050 so that just knocks the trailer out of contention, I think.

This may be helpful http://towcalculator.com/#

I beg to differ with the 20 percent calculation for tongue weight with a bumper pull trailer. The range that I have found recommended by reputable sources ranges from 5 percent to 15 percent. Ten percent is a commonly used figure.

Using a ballpark figure of 6,000 pound trailer weight, loaded with tack and two horses, I use a 600 pound tongue weight, which most 1/2 ton trucks and up can handle.

While you have little choice in loading options for a horse trailer, I also pull a dual axle equipment trailer for my tractor, and where the tractor sits on the trailer deck can alter the tongue weight significantly, from a negative number (very bad), to 10 percent of the trailer weight plus the tractor weight (good), to as much as 50 percent (also bad). I bought and use a weigh safe hitch when I am loading the equipment trailer, and also use it towing my Gore 2 horse straight load, which weighs almost 6,000 pounds (truck stop scale weight) fully loaded with two big draft horses. Its measured weight on the hitch ball is right at 600 pounds, and I am happy with that.

Don’t reject this 4-Star trailer until you do more research to confirm (1) it actually weighs 3,900 pounds, empty, and (2) 20 percent tongue weight really is needed. If you decide against the trailer and it is in the vicinity of Aiken, SC let me know so I can look at it. Thanks for all the info. The sticker on the tongue actually says 3960 lbs. I am planning to call my trailer guy tomorrow to run all of this past him. My last trailer was only 1900 lbs empty and I actually thought that was too light, but don’t want to go too far the other direction.

That sounds like a really nice trailer. I would make doubly sure that it was too heavy before letting it slip away. I had a situation similar to you somewhat. I had a 3/4 ton truck but a Class 4 hitch on it. I bought a new trailer that sounds like it probably weighs what this one does so I got a weight distribution hitch put on the truck. It was fine for years but now I have a new truck with a Class 5 hitch on it. I never had problems back when I had the old truck and I LOVED that WD hitch with the sway bars.

Probably too heavy. If you only plan on hauling 1 horse, I would probably go with a small 2 horse trailer. My small trailer was 2000lbs but it didn’t have much of a tack room. You don’t need a trailer that heavy. Heavier trailers are harder to stop in an emergency. My current trailer is 3000lbs empty and I have to admit, my smaller trailer pulled better and stopped easier. I like my big trailer, but I do miss my little one. Go smaller - you will be happier and your truck will get better mpg.

I posted the following in response to a post about 9 months ago. It will give you a bit more information about trailer weights. These are 2 horse bumper pulls. The original question was about how to find the lightest trailer, for a smaller tow vehicle. 4-Star, interestingly, is one of the very few manufacturer’s not listing weights on their site. Maybe because their trailers are heavy compared to the competition?

"As the original question was about light weight trailers, here are some curb weights of some of the lightest 2 horse bumper pull trailers, as listed by the manufacturers’ web sites. Some manufacturers, such as 4Star and Shadow, do not list weights. Curb weight is for the bare trailer, and does not include options.

Most all two horse bumper pull trailers are in the same ballpark weight range . If you want the lightest towed weight, horse weight is the greatest variable, followed by how much feed, water, equipment, and tack you choose to load along with the horses. Of currently North American manufactured trailers I looked at, the Kingston Classic Standard has the lowest curb weight, at 2100 pounds. It is within 115 pounds of both the old Brenderup Baron, and the Boeckmann Champion R . A 15 year old Brenderup Baron was recently listed as sold on line for $9,900. It looks like a new 2021 Kingston Classic Standard lists for about $14,600, and a new 2021 Boeckmann around $20,000.

The major difference weight-wise between American 2 horse bumper pulls versus European style is not the overall weight,

Not too heavy. I would make sure you have a hitch that is attached to the frame and never tow off a bumper. With my first trailer a steel 2 horse BP-- my truck was an older 1/2 ton and we had the new hitch installed and a new bigger radiator and it pulled for many years fully loaded.

Sort of a spinoff question: how much does a trailer ramp actually weigh? Just curious if that configuration (full doors plus ramp) is part of the issue.

I think it would likely be too heavy. The lowest common denominator is what you want to find. It will probably be one of your axles and/or your tongue weight, which will likely be overweight with a trailer that heavy. Here’s a comparison of my old F150 vs my F250 and my lightweight Exiss. These are the numbers to focus on. 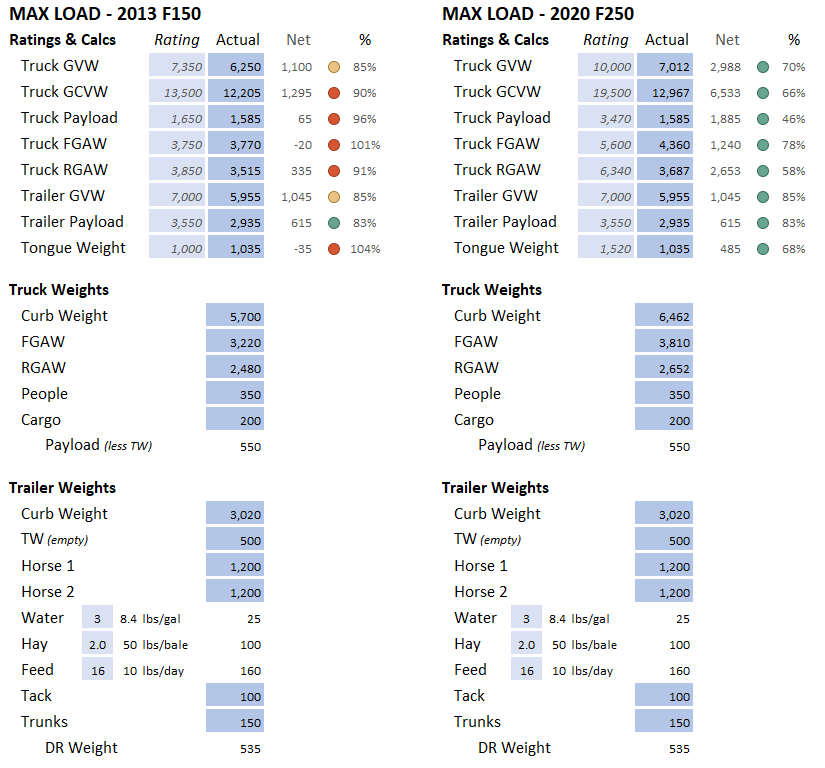