I know Ham’s got a large fan club here, so he needs major jingles today.

Normally he wakes me up crying to get out of his crate - if by some miracle I wake up before he does, he starts yowling when I turn on the bedroom light. This morning was silent. I rushed to get him out of the crate, and he was up on top of the kitty condo in there, just laying there. His eyes were dilated almost completely black, and when I talked to him, he kind of turned to me, but didn’t seem to act like he knew who I was. I petted him, thinking I could coax him down, but he acted surprised by that.

He wouldn’t track my fingers. He wouldn’t shut his eyes if I got my fingers close to them. He would turn to ‘stare’ at sounds - sounds he should know, he acted surprised by. He wouldn’t eat. I rushed him to the vet as fast as I could, and we’re waiting to see what they say. His eyes did react to light - once out of his crate (it has a blanket over it) and outside where it was brighter, the pupils reduced in size, but there’s clearly something wrong. I have no idea what it could be. Encephalitis is the first thing that comes to mind, but I have zero clue how that would have happened.

The vet just called - fever of 102.5, and his breathing is off the charts - 72 per minute. They started him on antibiotics, and gave him fluids. At least his vision seems to be better now - he’s tracking things more. I am completely freaked out.

Two fisted Jingles for your cutie!

Hoping for the best for Ham, please keep us posted.

Jingles for Hammie.
Hoping for the best.

Just to show everyone how much he’s grown - this is him with his adopted brothers, Maximus and Tiny. He weighed in at 9.4lbs today at the vet. (Ham’s the one on the left.) The vet loaded him up on fluids and antibiotics, and decided to send him home where he can have more peace and quiet. I’ll check on him on my lunch break and see how he is. At least he’s seeing better now. But still very much not himself. 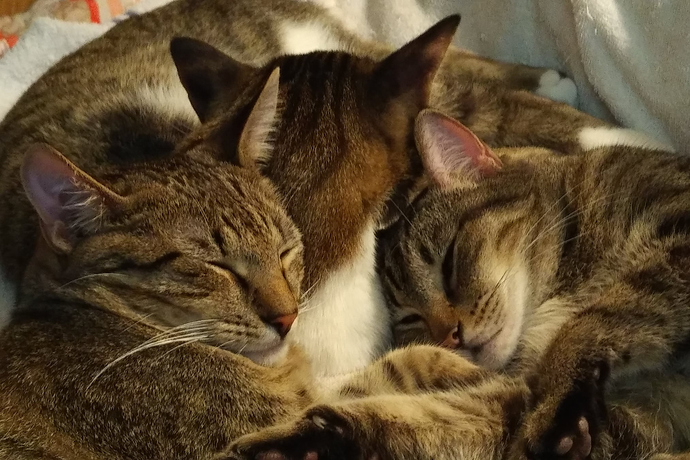 ((hugs)) laced with strength & patience for his worried Mom !!!

Poor Hammie! I hope you get some answers soon and he continues to improve.

The vet loaded him up on antibiotics and fluids, and decided to send him home for the time being. I went home to check on him a bit ago - he was asleep on the bed with Tiny, but when I walked in, he didn’t seem to quite recognize me. That’s super-scary to me. I still keep thinking about meningitis or encephalitis. If he’s not a LOT better by tomorrow - if he’s still acting oddly - back he goes. I may have to take him to OSU for more diagnostics.

He was fine last night. A bit on the quiet side, for him, but still playing and he ate supper and acted like his normal self. Whatever it is, it’s fast.

Long shot here, because I don’t think the increased respiratory rate fits, but any possibility of ivermectin toxicity?
Any road, major jingles for the little guy.

How scary - I hope he recovers soon. I would be freaking out, too. could he have had a seizure last night in his crate?

No, I don’t think so - there’s no ivermectin in the house and he never goes outside. I wondered about toxicity of some kind, but there’s no plants in the house, either, and everything that might be toxic is pretty locked up.

I wondered that, too, along with hitting his head on something. But I’m not sure if that would go along with the fever?

Do you use air fresheners with essential oils? They are toxic to cats.That’s how my Gertie acted before I got rid of my Air Wick.

An update on Hammie: I came home early to check on him. He came to greet me with the other cats, and when I sat down at the laptop, he curled up in my lap and slept there for the next hour. (In fact, he’s here now!) He didn’t eat with the others - sniffed and walked away - but he did eat a little about thirty minutes ago. He sees, though his eyes still look like he doesn’t feel well. He’s jumped off the bed without problem, and jumped up into my lap with no problem. Obviously, he’s still not feeling well; he’s not his usual playful self at all, and I wouldn’t say we’re out of the woods by any means, but at least he’s better. Still ready to blow off professional development tomorrow and head to OSU if I have to.

No. I use Febreze sometimes, but no essential oils or AirWicks. He loves to lick everything, including Lysol cleaner, so I’m always careful to keep everything put up and to thoroughly clean every surface that ever had a cleaning product on it. And truthfully, I didn’t even feel like cleaning anything last week!

Jingles for Ham and glad there is some improvement!

Glad to see there is a bit of improvement. Get better Hammie - stop worrying us and your poor Mom!

How many lives has this little guy used up already?

Right? I think he’s on #3 just this year! But he’s zooming down the hall now! I have NO clue what was wrong this morning.