Can someone help me find this online. Please and thank you:)

It’s not up yet

Does anyone know when its typically posted?

On the other Kentucky thread going on right now someone said it is going to be posted Wednesday (tomorrow).

Thanks, it just seems like I’ve been able to see Badminton"s xc for quite a while and it is 10 days away. Landrover is almost upon us and not even a peek at the course. Odd,

I hope they show us the jog but I don’t see it on the Broadcast Schedule. Anyone know the scoop on that info?

There may be a live feed on the event’s Facebook page. They have done that in previous years. But I don’t see any info posted about it yet.

I hope they show us the jog but I don’t see it on the Broadcast Schedule. Anyone know the scoop on that info?

They are doing something different this year— it’s going to be shown on the Hagyard Pharmacy Instagram page, with Lainey Ashker and Chris Talley commentating.

On Saturday morning 50 horses will leave the start box at the 2022 Land Rover Kentucky Three-Day Event presented by MARS to tackle Derek di Grazia's cross-country course. The course has an optimum tim...

Why do some of the flags have a black stripe on them?

Thanks J. for the heads up re course viewing:)

These are obstacles with options (hence the term “black flag option”). They offer a simpler option that trades complexity for increased time and distance. Generally, you will see first time horses and riders choosing these options to generate confidence in the horse. The course walk isn’t the best in describing each option. 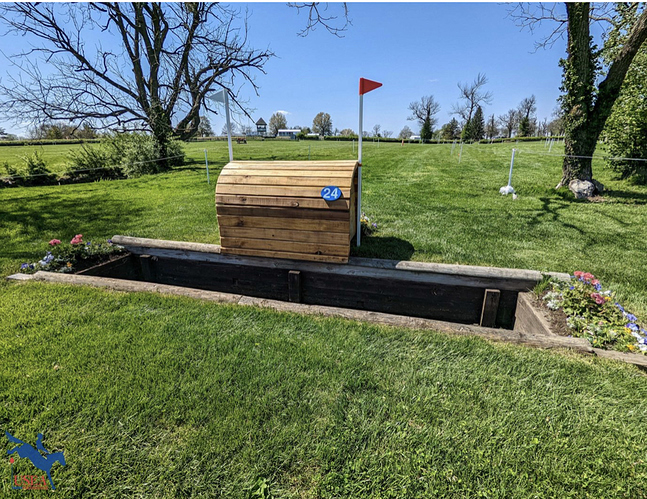 This one is… interesting.

My opinion is that this now is a pure training question/gimmick. Hyper accuracy with little relation to the true nature of the horse. I suspect there will be few issues here, but it is a fence that makes XC more of a “jumper” question than an “venter” question. How accurate is the ride and how well prepped is the horse? The previous skinny triple bars will prepare the horse and rider for the ride here.

But isn’t a 5* a test of training as well as fitness, stamina, bravery etc?

The black flag alternative can also provide a simpler option should something go wrong when trying the straight route. Often, after a run out for example, the rider will go for a black flag because a quick witted rider can spend less time jumping the alternative rather than circling and setting up again for the original route. Professional riders have quick reactions.

This course is quite a contrast to the Badminton course, which seems less “show jumpery” if for no other reason than it doesn’t rely as much on skinnies.

Let’s consider what you are saying. Hasn’t it been the assertion that as horses become more and more technically trained, the less independent they operate? Hypertechnicality, while enabling a safer course for horses begins to remove the necessity for independence because these questions are actually only answered via the rider inputs rather than the reliance on the horse to see and interpret the question.

Skinnies we intended to slow down riders and horses as it was believed speed was the issue in rotations. At the same time, they allowed the fences to be lower with increased technicality as the horse has to jump “blind” in the last 2 steps because the fence is no longer in their field of view. To counter that, “wing” decorations are used to give them a way to judge where the fence is.

Interesting problem @RAyers. There are very few 5* horses in the world. Only 7 such competitions across the globe: 4 in Europe, 1 in Australia and, now, 2 in North America. The reasoning behind the Maryland 5* was to raise the game in the USA. A 5* horse has come up through the ranks and at each level they should be learning, and improving, straightness, balance, rhythm, adjustability. Skinniest are a constant these days. So are tables. Course Designers are battling against riders saying “too difficult!” and riders saying “give me more!” Given the cost of running an event and the need to get as many people as possible to compete, the urge to be softer is very strong. Then the professional riders are aiming to produce to sell on to earn their living so making a 5* horse is not totally sensible. The Olympics are no longer at such a standard. Possibly more of a worry for old f@rts such as me is that riders are demanding synthetic surfaced for dressage and stadium which means horses are not so used to turf and terrain. Then there is a bit of an American conviction that dressage will win in eventing, which is a notion that has largely disappeared from European eventing: most xc is testing horse and rider because that is the unique and joyous part of Eventing for every one. People like Chris Battle has been very influential in getting riders to give their horses more rein, more independence, to get the job done.

Agreed interesting problem. And that is where the business models differ between the US and Europe. We see here the emphasis on bringing horses up to sell for top dollar since most of the upper level riders have no real income support. You want a string to sell and high end owners who expect returns.

That is the h/j business model I always bring up. I see eventing in the same financial light as the h/j world here was in the 90s and early 2000s.