We’re lost our BLM boys this past fall and are still reeling a bit from that.

Our vet said our farm was clean back in December, but we were planning to wait.

This morning, I was having a nice trip to the beach with the family. It was a perfectly ass-free day. Someone from church texted me and asked if I could take a donkey. An untrained, spoiled jack with zero manners. I wanted to say “No”, but our child was right there with pleading eyes. I said we’d look at him.

Seven months old and tethered to a fence because he kept jumping on the family. All stop. I was already calculating how to get the trailer and get him settled before evening chores. The halter he had on was already too tight and the remains of a lead rope were still attached. The other rope, that tethered him to the fence, was attached on the ring at his neck. Lots of bad things were about to happen with this little man. He ha already been found tangled up by a neighbor once in the month they had had him.

The last straw for them was when he played rough with a small goat and broke her neck. He was eating alfalfa and free choice oats, with some sweet feed added in. Way too rich for little man. Feet haven’t been touched (but he’s young, so not too bad). They said several times that he was given to them and they just weren’t farm people. Bless them for figuring out they were in over their heads and asking for help.

He is home. We dewormed him and quarantined him in the round pen. He was given a few lessons already. he loves people, so very easy. I got him to pick up both front feet and stand tied a little. He had a leading lesson in which he was taught that rearing up on people is bad. It was so easy because he’s little. I just put my arm under his legs and made him back up on his hind feet if he jumped up on me. If he wants up, I will say when he can get down. He didn’t like that very much. The behavior has lessened already, lol. Very sweet little man. I gave him a giant jolly ball thing and we played with it in the round pen to show him. He hollered when went inside, but he was playing with the ball an hour later. I gave him only a little of his alfalfa with some grass hay. I’ll bring him down off of the high diet over the next few days.

Wait, hang on, do you guys want pictures? 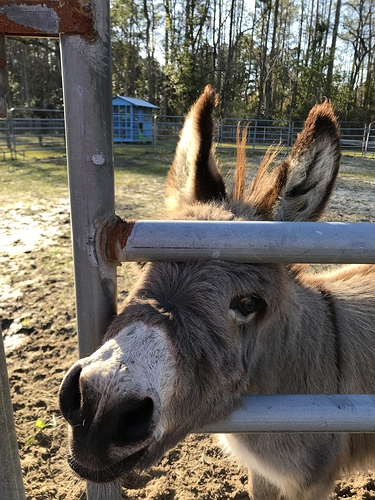 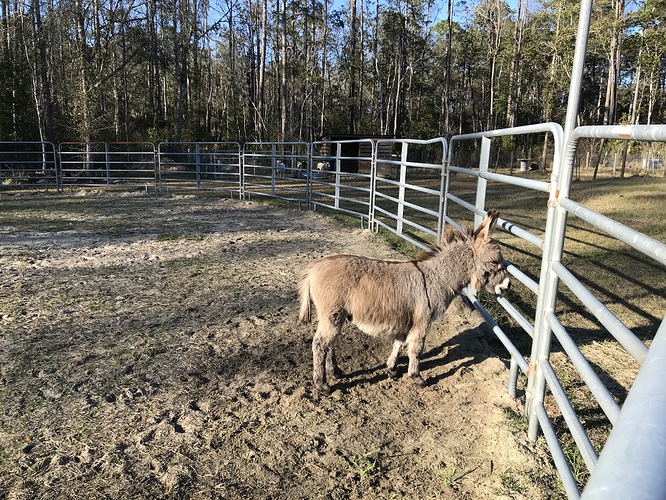 He had a leading lesson in which he was taught that rearing up on people is bad. It was so easy because he’s little. I just put my arm under his legs and made him back up on his hind feet if he jumped up on me. If he wants up, I will say when he can get down. He didn’t like that very much.

That’s so funny. Reminds me of when I was working with Saddlebreds. At a show went to help a friend who was working with Hackney ponies, clip. They were so small, when they reared, we were like, oh please get on your hind legs, makes it so much easier to do your ears!

Omg he’s pocket size!!! Glad you got him, it will help heal your heart.

OMG of course you couldn’t say no. He’s adorable. 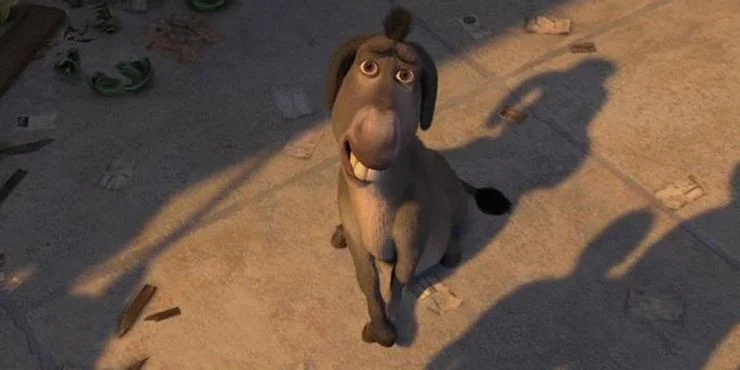 He really looks like “Donkey” from Shrek. What did you name him?

We haven’t found his name, yet. They had a name, but it was not right. We’re hoping he tells us his name today. He has a low, ruffled bray. It starts out sounding more like a ram than a donkey.

I wonder…is he truly a mini? At seven months old, he could just be a small standard, right? I’ll measure him today.

Congratulations on the new addition! He definitely ranks high on the adorableness scale.

He is very determined not to give up biting and rearing. I’m very determined to make him civilized. Let’s see who is more stubborn. I’m betting on me. As my grandmother used to say, before beating me at cards, “Age and treachery will always overcome youth and skill.”

His name is Tony. Roughly named after St. Anthony of Padua (patron saint of donkeys) but with a gritty edge.

More pictures. He has a dirty face from playing with his ball, lol!

Attention is better than the ball. 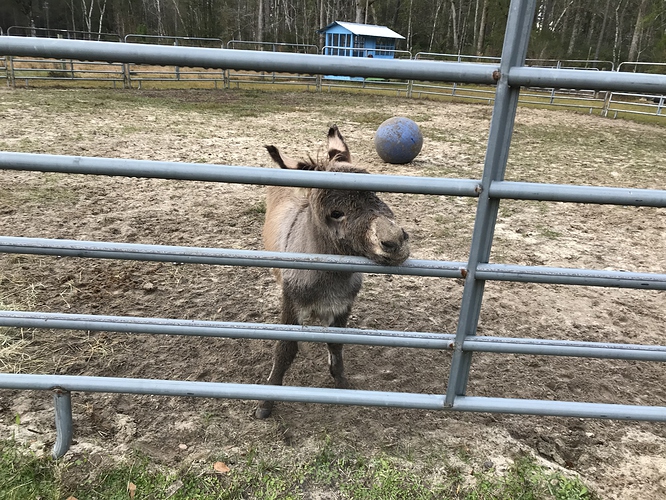 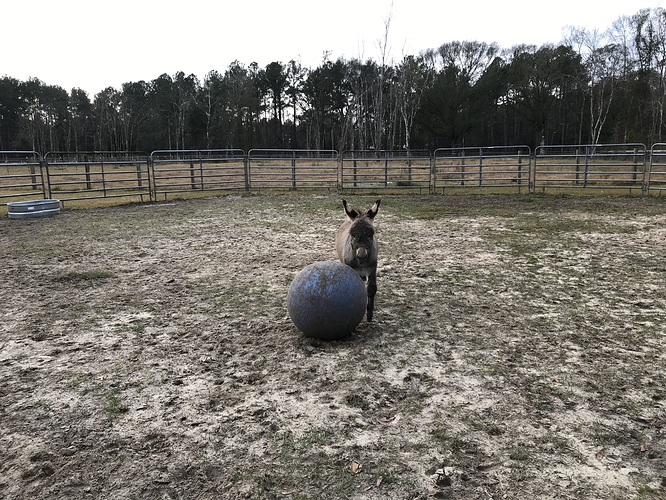 He sat on it shortly afterwards. 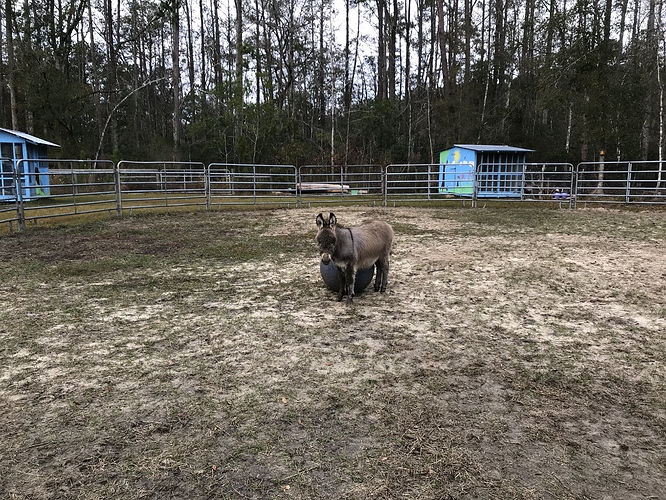 He is precious! Congrats on the new family member.

I bet at 7 months you will be able to out-stubborn his behaviors given all your experience.

I have a now 8 year old Jenny who was born to unhandled/feral parents on someone’s back 40. My girl was 7 months when I got her; the owners did nothing with their donkeys but were smart enough to understand she needed to go before dad bred her. While she didn’t have the same level of negative human interactions as your guy, we had to overcome quite a bit and she’s now a totally different creature.

Judging from your pics, he is a little bit smaller than my girl at 7 months- maybe 2 or 3 inches smaller. She finished at 11.3h. Both her parents were taller, I think bad nutrition/no care for the first 7 months stunted her a bit.

I’m so thankful you got Tony out of a bad situation that was going nowhere good fast. The name Tony makes me think of the Mafia, like “Tony the Teeth”.

He will thrive under your care and work and can’t wait to hear about his progress.

For the record, one Saanen dairy goat we had, a doe, started jumping on people and at 150 pounds it was a hell of a hit!! Our daughters were small so we swapped her out for another one before anyone got hurt.

What a beautiful little man. But he needs a friend!

Enabler! Yeah, he probably does…

He definitely needs a buddy

jacks seem pretty easy to come by, should be able to find one quickly of you want one. He’s adorable, good on you for taking him on. I’m guessing gelding will help ease the 'tude, too? Congrats!

Has anyone ever told you that you have an adorable little ass? LOL I love Tony. Too cute.

The vet is coming out today to vaccinate the cats. I’m going to call this morning and see if he can add on donkey gelding. I hope so, but it’s a big ask.

His schedule is tight, so our regular horse vet will be out later this week.

The vet is coming out today to vaccinate the cats. I’m going to call this morning and see if he can add on donkey gelding. I hope so, but it’s a big ask.

Not much difference between a cat and an uncivilized mini donk, not sure why you’d think the vet would say no.

I laughed at your method of getting him to keep all four feet on the ground unless specifically requested to do otherwise. I’ve never worked with an animal small enough to pull that one off but I will remember it!