I like the look of a monoflap (sporty!) but sensible brain knows that the best fit for me and horse can come in a dual flap saddle. And in fact I bought a very huntery (used) Voltaire Stuttgart for just that reason.

Trainer is keen for me to get a monoflap and I guess I just… don’t see the need. Reasoning is security, but I am not always falling off and my leg looks fairly stable in this saddle compared to others I have had (floppy ammy aboard!) The Voltaire is full buffalo and I find it nice and sticky, but it does have the smallest possible knee/calf blocks.

The monoflaps I have seen , including mine, have the billets attached higher under the panels. Not to the flaps. The long billets keep the buckles from tearing up the flap
And keep all that crap out from under your leg

The thing is I’ve never felt impeded by stuff under my leg and the buckle guard is doing a good job guarding the buckle. So maybe it’s all moot for me!

I’m with you on the nonfeeling lump club. I did not feel a significant difference between my monoflap and my standard saddle. I also had the “stirrups hitting the buckle” problem which drove me, and my mare, nuts.

I also had a sadde fitter suggest to me that a monoflap might be uncomfortable for some horses due to the thinner straps being tight against the muscles that wrap the ribcage. I don’t know if there’s any truth to that but my very sensitive mare had a strong preference for a standard saddle even on a lungeline, so I do wonder. It makes sense, but so many horses seem unbothered that it might be total baloney.

What reasons does your trainer offer to support her suggestion?

Both horse and rider are individuals. Finding tack that both persons in the partnership actually like is a never ending process. If the saddle works for you both, horse is comfy, you feel secure, why change? Or try the trendy monoflap on a test ride and ask your horse what s/he thinks.

Honestly having ridden in a wide range - I don’t notice a huge difference in feel between a dual flap and mono, all other variables the same. I do think that short girths have to be perfect to not bother the sensitive horses - and my long leg + smaller horse = ankle/stirrups hitting the buckles more often than not which drives me NUTS. If your current saddle fits everyone nicely, no reason to change.

I can’t answer all of your questions, but I’m with Willesdon on asking questions of my own: why does your trainer feel you’d benefit from more stability?

Individual preference is individual preference. I have not seen that there is a significant difference in stability between monoflaps and dual flaps over lower level stuff. There is a difference once you are jumping more than 3-4Ft, in that in dual flaps you may fight against the motion of the horse moving the flap under you. In big jump efforts sometimes the flaps slide back and if you become unseated or momentarily unbalanced it can be problematic. Even then it is typically a non-issue unless you are on course pressing for time.

For lower levels I really don’t see it mattering beyond personal preference for horse and rider. I have both types of saddles: a BC Vinci monoflap, a Stubben Zaria monoflap, and an Ainsley XC Pro dual flap. Which saddle I feel most secure in depends on the horse it’s on. I love my Ainsley XC but I wouldn’t want to ride in it all day; same goes for the Zaria. My BC is a long distance rider’s dream - comfortable, stable, unobtrusive. However other people have ridden my horses in these saddles and commented on how little security they felt in them - maybe because they do not have any sort of traditional blocks (not even pencil blocks) to help guide their legs. Or maybe because these saddles are uniquely suited to a specific rider’s anatomy and they don’t jive with it.

But none of my personal horses have really shown a preference either way.

I like monoflaps better for the most part. I have felt less leather between me and the horse makes for a closer contact feel and lighter saddle; plus I like the simplicity of leather cleaning/care around monoflaps.

Bigger blocks can actually impede your position. I would check out the insta for saddlefitting.us she has a lot of information on there about it.

That being said I love my Voltaire. I’ve ridden in a lot of different monoflaps and the Voltaire is by far my favorite. I think having short legs is a factor, short legs with a girth under a flap is a lot of bulk.

I’ve never gotten on the monoflap bandwagon. Long billets don’t seem more comfortable for the horse: two narrow straps vs one fat padded one. Also, I tighten the girth when I’m on, and with a monoflap I have to lean far down to do it. All well and good at home, but on a chilly morning at a horse trial? Taking your life in your hands.

The buckle / stirrup problem is easily solved with a slightly longer (or, I suppose, shorter) girth.

I guess you could sit in some monoflaps and see if you like them as well as your Voltaire?

I have the stumpiest legs ever and I hated my monoflap because my stirrups were always clacking against the girth buckles.

It’s entirely preference, for horse and rider, I think.

The buckle/stirrup problem is not that easily solved - it depends on the anatomy of the horse. The stirrup is long, and if you go too short you’re in the elbows of some horses. Too long with the girth and now the buckles are hitting your ankles.

Trainer is keen for me to get a monoflap and I guess I just… don’t see the need. Reasoning is security, but I am not always falling off and my leg looks fairly stable in this saddle compared to others I have had (floppy ammy aboard!)

I have a slightly different question than posed by previous posts: why does your trainer think the monoflap would give YOU extra security? Depending on anatomy, some riders do better in monoflaps and some do better in dual flaps.

I’ve not done it on a Volatire, but it’s REALLY easy to remove blocks and replace them with velcro so you can stick on whatever block you need. I’m sure it would void any warranty you have with Voltaire if it’s done by anyone other than a Voltaire approved person.

Go for it. Having a dual flap with long billets is sort of an in-between step from dual flaps to monoflap. It removes the bulk of the buckle from under your leg.

Yes. And it makes it nearly impossible to have someone other than a rep for the brand replace your billets. And I’d bet it makes replacing billets more expensive than if they were not attached to the flap.

Your ankle should be enough behind the girth for this not to be an issue. Sounds like your legs are short relative to the circumference of your horse’s barrel, too. Or maybe I’m missing something because it seems several people are having the same issue.

It’s a fair amount of hype. There is at least as much variability in close contact between 2 different dual flap saddles or 2 different monoflap saddles as there is between a dual flap and a monoflap version of the same saddle. I feel a smidge closer in a monoflap than a dual flap, but if I’m not paying attention, it’s not enough that I’d necessarily even notice. I think the biggest difference is as Beowulf says, the potential for movement between the flaps. The most important thing is that it support your anatomy, and depending on your build, a dual flap may do that better.

A lot of monoflaps ARE made by just sewing the two flaps together, or almost. That’s why there is so much variability between different monoflaps. A Black Country Vinici is not much different than a dual flap saddle with the top flap removed (I mean, the flap leather is way softer and has some extra design features so the billets won’t pinch your leg…). I had a client wanting a cheap but secure dressage saddle to start her young jumper prospect in and she was given an otherwise solid saddle with badly damaged flaps. Removing the flaps and riding in what was left was one of the options I gave her but she found the saddle uncomfortable so kept looking for a better option.

Speaking of which, having the billets attached to the flap as in monoflaps I have seen, doesn’t that restrict the angle and location of the girth? Girth comfort is a Big Deal when I ask the mare.

It depends on the saddle maker. I have an older Vega monoflap and a Bates Advanta monoflap, both of which have the billets independently stitched to separate nylon points beneath the top flap, with a thin protective leather flap covering the billets on the underside (horse side). This is EXTREMELY important to me; some brands (like Devocoux) have both billets as a single wide piece of leather split down the middle: all of you is essentially riding on one leather strap, and if that breaks (face it, billets get a LOT of salty sweaty abuse) you are in deep trouble. I have had one of my Vega’s billets tear at an event (for SJ) but felt safe enough to temporarily rely on the remaining good billet and an overgirth. Repairing the billet was easy at the saddle shop, as they just replaced it and stitched back to the nylon.

Both the Vega and the Bates allow the billets to “spread” and angle a little forward or backward separately to best fit the horse.

I do think that short girths have to be perfect to not bother the sensitive horses - and my long leg + smaller horse = ankle/stirrups hitting the buckles more often than not which drives me NUTS.

Meanwhile, I’m over here using the stirrup/buckle tapping as a cue for more bend before I increase leg pressure. Just proves the range of preferences, doesn’t it?

Yes exactly- this type of billet makes no sense to me 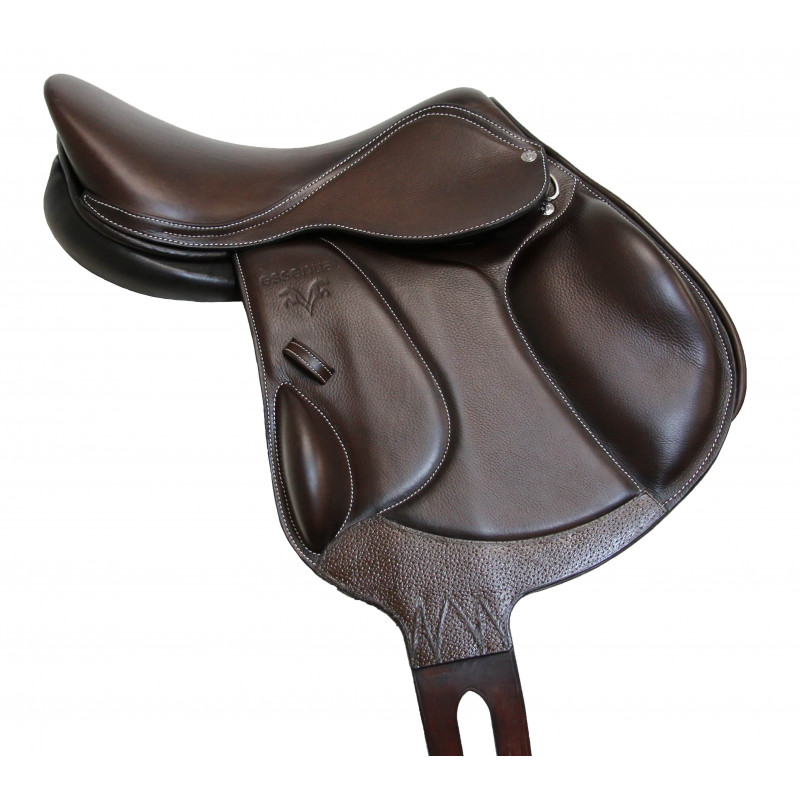 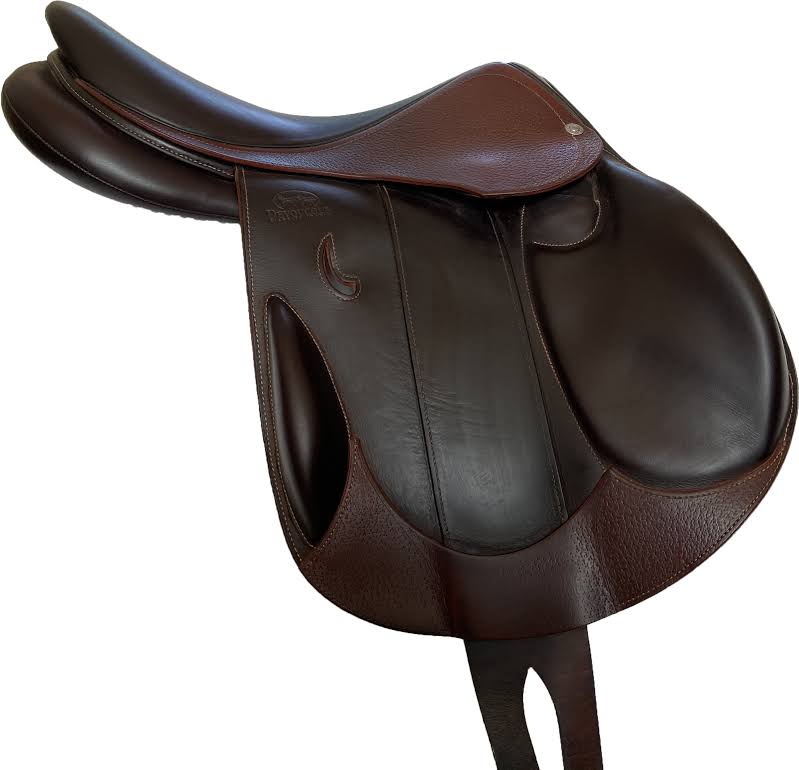 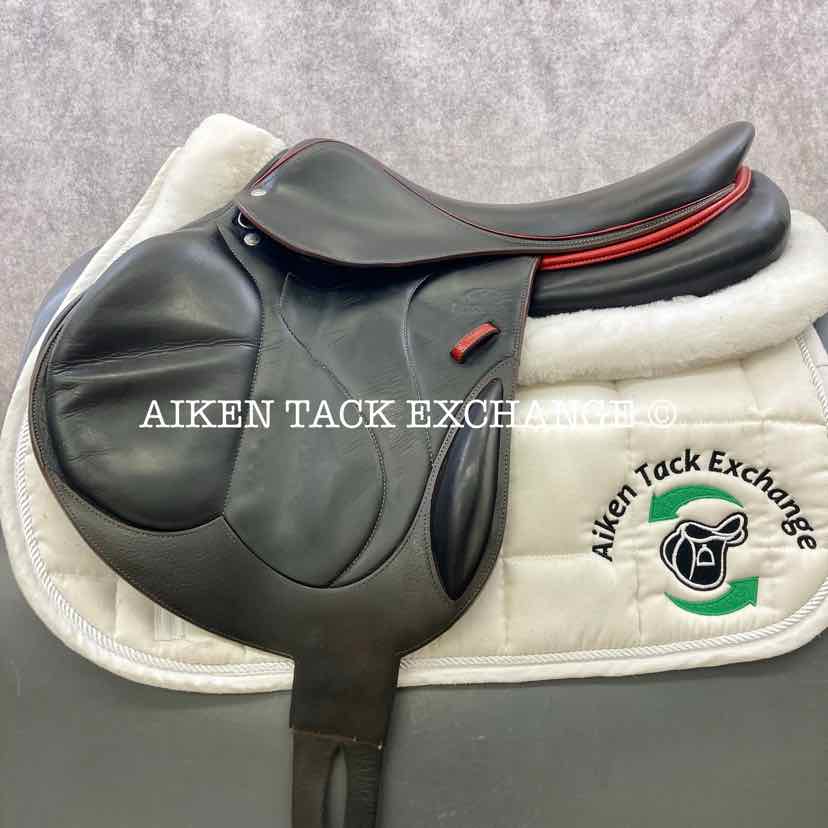 I guess you could sit in some monoflaps and see if you like them as well as your Voltaire?

I tried a couple when saddle shopping and noticed no appreciable difference, aside from the annoyance of ankles hitting the girth buckles so…

I have a slightly different question than posed by previous posts: why does your trainer think the monoflap would give YOU extra security? Depending on anatomy, some riders do better in monoflaps and some do better in dual flaps.

My (green) mare overjumps, sometimes by a lot. I think she’s feeling that I could use some extra blocks (which I neither disagree with, nor does it necessarily mean I need a monoflap) - something “more secure” but why that’s a monoflap I’d need to ask her.

I think my next step is to find someone (who?) to get some velcro block action on the Voltaire before I go throwing out a saddle I like OK for a style I have big reservations about (girth buckles, girth billet angle, cost)

I don’t have a mono flap, mostly because I’m poor and the old dual flap Pessoa I have does the trick. No need to fix something that isn’t broke.

If you’re perfectly happy in your dual flap saddle and it fits your horse though … the cynic in me wonders if the trainer is sponsored by a saddle company and has a quota to meet, and is therefore pushing her clients to buy new saddles they don’t truly need.