Question about a stray kitty

There has been a kitty living in a culvert nearby. I went over today to check it out. People have been feeding it because there were several empty cat food cans in the culvert. The cat came out to me immediately, crying. I went home and got a cat carrier and took it to my vet. Less than a year old, unneutered male, no chip, fleas. Had them put on some Revolution Plus while he was there. Has an appointment to be neutered on Wednesday.

Long story short, I took him home. Will adopt him if his owner isn’t found.

They tried to get a fecal sample at the vet’s but said he was empty. He has not used the litter box yet.

About wanting to bury the food, I’ve never seen this happen before. Have heard about it but don’t remember what the cause or outcome was.

Any insight you all can give me? 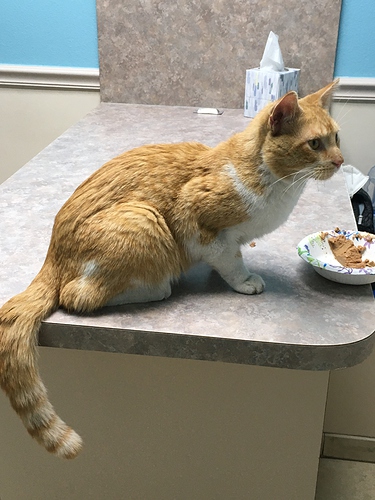 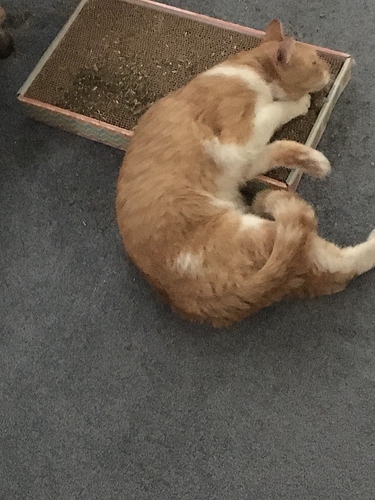 Oh, he’s very cute! Thank you for taking him in and caring for him.

I love the white spot on his hip. Once he’s clean and has some more meat on him he will be quite handsome.

He has matching white spots on both sides of his hips. He is now flat out on a towel beside my chair.

I hope we are a good match. My previous kitty, also gotten as a stray at about the same age, was an absolute gem. This one I will have to watch closely as he would very much like to go out.

I’ll bet. Plus I bet that’s how he wound up on the streets. Chopping his nuts off will fix that. mwahaha

one of my cats also does the food burying thing. She is full but does not want to give up the goods. She has competition here for the good stuff, another cat and 2 pups.
I can see where he feels like he needed to protect his resources.
he does not look like he missed many meals though. cute guy

I’ve had a whole lot of cats make the burying motions, from all different backgrounds! He’s saving it for later. I think it’s just hard wired into some of them.

He’s adorable. Thank you for caring about him

My Ella will try to cover any food that isn’t inside a food dish. She also tries to cover other cat’s puke or stray willnots, she makes finding these easier for a quick clean up if I don’t see them before she does. If I spill a drop of coffee on the floor she will try to cover that up as well. She will also carry a bunch of cat toys and pile them in one spot then crouches over them so none of the other cats can get them.

I’m telling you - I wish we could know what’s going on inside their little heads.

I’m telling you - I wish we could know what’s going on inside their little heads.

I think, “They’re mine, all mine…mwahahaha!” was going through Ella’s head at this particular moment. Poor Bird wanted the Fishy Wishy toy. 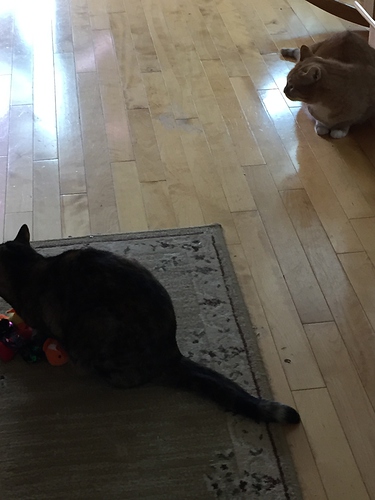 baler has a bad habit of stealing the other cats’ toys. Only Diva (RIP) would whack him in the head. The other simps just get huffy and leave.

@Joanne - does he have a name yet?

Tentative name is Oliver. He found a catnip toy that belonged to my previous kitty and was having a great time with it.

I had no idea I would have a new cat today. I am not over the loss of my previous kitty. Was merely going to see if he was still there at the culvert and to bring some food. Called two cat rescues to see if they would take him and they were both closed today. It was not the plan for today. A Valentine’s Day surprise for sure.

When the time is right a kitty will show up. I would take it as a sign.

My cats bury food. Tiny does it when he just doesn’t want it, but doesn’t want anyone else to have it either. Oliver is probably full, but isn’t willing to walk away from free food. Hence the burying.

@BrendaJane has the best response… that is my take on this issue. Congrats on your new kitty! Yes, my “Prickle” buries things. He says, “This food is shit, I know what to do with this”. It isn’t shit, it’s very nice food, and he’ll eat it later… but it’s an opinion being aired, and he’s got lots of those… opinions, that is. He is here right now, as he is every morning, working on this computer with me, laying across both my arms, purring. He presses some buttons sometimes, I have to backspace.

“Prickle”… he’s a bit of a prick, and has lots of sharp points. SPCA kitten, male calico. (How could I say no?). The DH named him… it stuck.

I noticed that is coat is really rough. Not soft or silky like my previous kitty, but he had medium to long hair. Been brushing him a lot and he only clamped down on my arm once but didn’t bite. Guess I was a bit too vigous for his liking. He does enjoy being brushed, though.

Is a rough coat something certain cats have, or is it a result of his rough beginning of life or maybe the fleas have caused this? I didn’t find too many dead fleas from the Revolution.

I have heard that giving nutritional yeast can help with that.

What’s your (g) experience with that?

Is a rough coat something certain cats have, or is it a result of his rough beginning of life or maybe the fleas have caused this?

Poor nutrition, dirty, fleas. Once he’s well fed and healthier it should improve

His fur will get nicer and softer with consistent food and care. From the pictures you posted, he’s in very good shape for a stray. A lot of times they have runny eyes and noses, they stink, they have cuts and open sores, etc.

some cats have softer fur, some not so much. I can tell by the feel of the fur which cat is sleeping on my legs.
Give him some time to get used to the good life! He looks like he will clean up nicely.

I think the burying is not unusual for cats who have lived outside. Burying uneaten/unwanted food hides it so potential predators or competitors are not attracted to your living area. When I was raising 8 foster kittens, only 2 would do that with food - and they did it when they did not care for the flavor of food (turkey? how dare you! I’m a tuna boy!)

His coat will improve with his better nutrition. Once the fleas are nixed and he is cleared of all internal parasites and worms it will definitely get soft and shiny. Street kitties rarely have access to fresh, clean water so they tend to be chronically dehydrated.

One thing is for sure - this ginger boy has chosen YOU. The fact that you were able to get him into a carrier and are brushing him means he sees you as his rescuer. No truly feral cat would allow brushing, much less being put into a carrier. Congrats on the new family member

I think your previous kitty did a little match making-here.

BTW - I love the name Oliver for an orange stray kitty, just like the Disney Movie Oliver & Company! 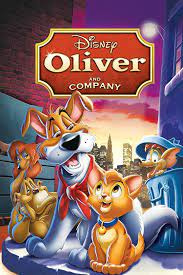