World Equestrian Center in Ocala, Florida has had applications for national and international dressage and eventing competitions in 2022 rejected by the United States Equestrian Federation in an escalation of the dispute over licensing of...

Greed and egos. Why not just work with eachother? Take turns? Take turns in a competitive way and let the show users decide which venue is yummier?!

Pretty sure that post was later modified to reflect its only the CDIs, not National shows. THere are shows scheduled there on the USEF calendar through December at least.

And regarding taking turns, I believe there are no weekends during the season without a dressage show within the mileage rule limits right now. And why should existing shows and managers have to give anything up to the latecomer? It is a fabulous venue to be sure - but the stabling is ridiculously expensive for Dressage shows, class prices are higher and the bump usually for FEI classes comes at 3rd or 4th level… And they have so many events already scheduled, who is to say what arenas dressage would have? They do have outdoor arenas. Last winter, the huge H/J show weeks filled all the “attached” barns, and dressage competitors were across the parking lot (oh, you could get there “inside” following the “green mile”, but I was told it was really a long way time-wise).

There are many people signing this petition. 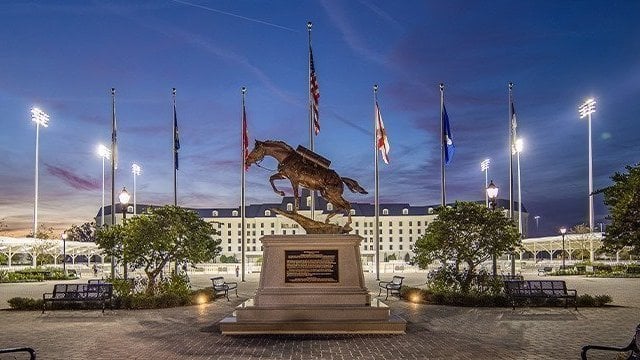 Why? Because it’s BETTER.

The horse show world needs to focus on customer satisfaction. The culture of it’s our way or the highway is antiquated.

And why should existing shows and managers have to give anything up to the latecomer?

This could also be said as - why should existing shows bother to cater to their riders when there is no ability for any competition to happen.

“Better”… hmmm. Footing is good - so is the footing at FHP, Grand Oaks, the new Alachua COunty facility (Old Canterbury), and Jacksonville… even Clarcona isnt bad, nor Tampa. COvered arenas? Grand Oaks, Alachua (including an indoor), Jax, Tampa.
One thing they are “better” at is a Disney-like atmosphere and high prices. Stalls are $285… classes are +$10 from other shows and the price jump comes not at FEI levels but at 3rd or 4th. Restaurants there are expensive (and nothing within a few miles either, nor hotels within quite a few miles - theirs is super fancy). RV sites are $85/night if you get it by the night. If you sign up on the entry form it’s more because it’s Tuesday thru Sunday just like the h/j shows (same as stalls - I dont know many dressage riders show haul in 3-4 days early…)
Roberts has gotten everything he wants from the county and city (oh yes, they changed all the zoning and comp plan for him). He even got the COnvention Center (and he is 10 miles from downtown, and will have a captive audience). He thinks the rules should be changed for him. So far, he is right.
And that is what bothers me the most.

As far as Dressage, They DO cater to the competitors. Very friendly show managers. Facilities have improved their footing and as I mentioned, there are other covered arenas and an indoor at Jacksonville.

The air conditioning sure is nice. I have a mare who struggles with the heat. It was fabulous to be able to show her without begging for an 8am ride time. So is being able to see CDI’s without having to drive to Wellington. They’ve gotten better about putting the Dressage stabling closer to the arenas.

I don’t think the other show managers have much to worry about. There will be a subset of people who would like to go to a quieter show, or simply don’t want to pay the more expensive fees.

Different riders like different venues. I know in my area there was one venue I liked but others didn’t because their horses didn’t like the footing.

I’m all for competition between shows, venues, etc especially when it comes to amateur exhibitors. Amateurs have gotten the short end of the stick for a long time and I for one like the idea of working for a customer’s business.

But this act seems obviously done to punish a party seen as an offending one.

Well, I am absolutely sure that is the view that WEC would like everyone to have, but since it is their side of the story, and only their side, I suspect there’s more to that story.

And since it is not just USEF, but FEI, that’s two sides not yet represented…

(I absolutely giggle at the idea of WEC as a great bargain. Better value than HITS for a similarly huge chunk of your wallet? Absolutely! But making horse shows more affordable for those on a budget? Now that free stallapalooza is over, it’s just expensive. But gorgeous)

I’m confused. Counties changing zoning for development that elected leaders believe will benefit the county is done everyday all across the country. It isn’t “changing the rules.”

If you’re worried about high prices market competition is the tried and true way to bring them down.

They extended the urban services line wayyyy out for him. And, the mileage rule prevents (or should prevent) direct competition between venues. The already are more expensive than any other venue in NC Florida.

Yes, this is called “economic development.” When a developer comes in with a potential business model that will bring in huge amounts of money to the community–not just directly from taxes, but also in terms of jobs for the local economy–local elected bodies tend to accommodate and invest in them. (How much do you think a billion dollar construction project helped the local economy? How many jobs do you think a billion dollar facilities provides once it’s completed? How much tourism money do you think a billion dollar facility brings to the county?) Local government makes investments and reap both long and short term benefits. That’s government, that’s business. It is neither unusual or corrupt. (In fact, if you wanted to do some digging I’m sure there are answers in public documents that would have outlined the projected revenue to the county/city that would have been presented prior to a vote.)

The milage rule prevents competition and it costs competitors money. Don’t complain about how expensive showing is then turn around and be a fan of the rule.

In general, I would recommend people pay more attention to their local government. People get all wrapped up in national politics and totally ignore that their local board of alderman/county commissioners et. al. have a whole lot more affect on their day to day life and their pocket book than any other level of government.

I don’t understand why people are b****ing about it. If you don’t want to compete there because of loyalty to another venue or because you think it is too expensive or because you can’t stand the Roberts, then don’t show there. No one is holding a gun to your head.

And TPTB at USEF are being asses (not surprising). When they reject licensing events at a fantastic new facility so they can “protect” a long-standing show series at a sub-standard facility, what does that say about their concern for the welfare of the horse or the comfort of the riders/owners/grooms/vendors/spectators?

As for the mileage rule - it is a relic from a bygone age and needs to be sunset.

So, I don’t know anything about the local politics or the show options in Ocala, but my concern with “let the market decide” would be that from the sound of it, the WEC people are much better placed to absorb temporary financial losses than the organizers of smaller shows. If entries split between WEC and other venues, potentially neither would have enough entries to stay solvent long-term. WEC could absorb the losses temporarily and then when their competitors go out of business, be a true monopoly and jack prices up. Is this a legitimate concern?

the organizers of smaller shows

Are there smaller shows? I thought this was an area of all huge shows.

I have no idea! Lorilu mentioned a bunch of other shows:

Footing is good - so is the footing at FHP, Grand Oaks, the new Alachua COunty facility (Old Canterbury), and Jacksonville… even Clarcona isnt bad, nor Tampa.

Are those all huge shows run by organizers with real-estate-developer pockets?

FHP and Alachua/Canterbury are state/country owned parks, so they are more precarious than developer money. Here’s hoping they continue to get support, although given they cost difference between them and WEC, they will probably not see a huge drop off in their #s

Grand oaks doesn’t compete against the winter circuit, it’s more focused on driving during the winter.