Y'all, I bathed and clipped my donkey and he's so proud of his hair cut

I have only ever bathed and clipped him one other time (he can be slow to shed and he got overheated). The vet sedated him to do his teeth so we took advantage of his stupor to get it done.
This week we’re in the upper nineties to low 100s, it’s humid as hell, and it’s not cooling much at night. So this AM I steeled myself for a tussle and caught him early before it got too beastly.

I tied him short and got him bathed without mush fuss- he was compliant and stood like a stuffed bear. Then, it was time for clippers. Again, he’s a donkey - not a horse. So, armed with a cup of timothy pellets and a stout halter and lead and post, I tied him short and he ate some pellets while I rubbed him with the clippers (off). He was suspicious but ‘ok’ - so I turned them on and he tried to leave but didn’t fight, he accepted being tied and I took my time, lots of rubbing not clipping. walk away, come back, rub his head, more treats…and I clipped him. Bless his soul, he was shaking - but he stood like a good dude and got lots of praise and treats and breaks and rubs. Got him cleaned up well enough to get the heavy hair off and celebrated his new look with more treats and turned him loose while I picked up…

Normally, he loves to roll at the drop of a hat, and I had two fresh stalls he could go in. Yall, he carefully walked back into the paddock with the horses, had a drink of water and let Archie inspect him, and then methodically positioned himself in front of the barrel fan I set up for their run in area. No rolling. I swear if he’d had a mirror he would have admired his new-do

The pics…where are the pics!?

LOL I was dripping sweat and peeling donkey hair off my pants! Imagine a moth eaten little man looking pleased as punch

Mmm, so you shaved your ass! Do I really need pictures?

I tried. I was mugged 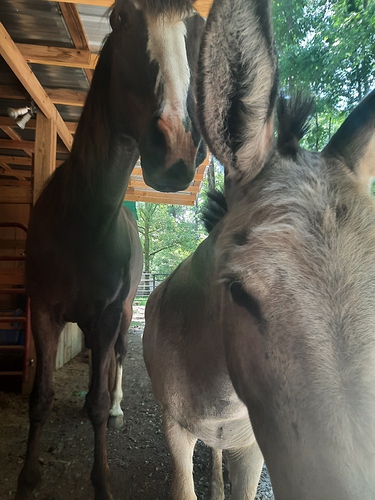 I have two horses who have RAO, we call them the Wheezies.

These two Archie and the donkey, are thick as thieves, best pals, true buds. We call them Moose and Squirrel. You have to be a certain age to get that one.

I came for the pics of a freshly shaved ass. I used to keep a folder full of freshly clipped donkeys and cats when I tried online dating so that I could appropriately respond to guys that wanted donkey and cat pics if ya know what I mean.

OMGosh. Are you saying that total strangers on-line ask for those types of photos? Yikes. I definitely like your comeback pics.

I should take a pic of him peeing. I have no idea where he stores that thing, I swear it rolls up like garden hose. A fat black one Lololol

OMGosh. Are you saying that total strangers on-line ask for those types of photos? Yikes. I definitely like your comeback pics.

You’d be surprised. I had no idea so many guys were interested in cat shaving, so I was happy to oblige with a nice trimmed kitty pic. This was one of my favorites. I think the expression got my point across and they’d rarely message back… although I did get a few angry replies. I should take a pic of him peeing. I have no idea where he stores that thing, I swear it rolls up like garden hose. A fat black one Lololol

We took my nieces when they were little to a little petting zoo and they had some barn animals outside, including a very relaxed horse. I’ll never forget my sister’s reaction. She’d seen me ride, and always wondered about that whole “hung like a horse” phrase, because she didn’t think there was much there. It went something like this:

At this point I about died laughing. Yep, my sister was in her 20s before she knew that a horse weenie stays in the sheath when we’re galloping around.

I have a friend, Jody. She has a step daughter Jody. So they are Big Jody and Little Jody. DH is just Big.

Big Jody and Big came to visit. Donkey peed and Big wasn’t at the barn yet and Big Jody was goggle eyed and hollering at him to hurry up…

BIG! GET OUT HERE!
HURRY BIG! You gotta see this!

Love the story about your sister.
And the kitty is so cute! Great way to identify and get rid of the creepers.

Good Gad! What website were you using that you got THOSE types? So I can avoid it…should I ever lose my mind and decide I want to do online dating…

@Djones - your ass is cute.

When I was little we were having a picnic for relatives and I took some of the other kids to the barn to see my pony. Kids, including a boy, didn’t know what “it” was when he let down. One kid decided that it was released, then cut off into chunks, which were visible about the pasture. He was referring to manure.

Of course, we also went through the more traditional misconceptions that the cow with horns was a bull, and that it was sure to attack little Susie bc she was wearing red. I tried to correct all of their weird ideas, but I was younger than the one making these declarations, so no one believed me.

LOL the first time my DH saw a gelding let down and get all relaxed I swear his eyeballs popped out of his head. He was like “Where did that just come from?!?!” Like it was some sort of weird penile magic trick. So then I explained sheaths to him, and then sheath cleaning which freaked him out a lot and I think made him glad I was leasing a mare lol.

Update: he STILL hasn’t rolled. His tummy is dirty so he laid down, but he’s gonna preserve his salon style as long as possible

I am dying laughing, his expression!