I have an 80x80 dry lot that needs a shelter that up to three horses can share - open but not too open since it needs to serve as a wind and rain block. Does anyone have a fabulous design or concept they can share? I’d also consider multiple smaller shelters - this area does already have one 12x12. Thanks!

I know one property that has 4 or 5 small drylots. Each lot has its own shelter.

This run-in from Grey Horse Matters’ blog has always been something I’d like to build in the future! Based on their other photos, the more open side has two big openings side by side but maybe one could be closed if you’re in a really chilly/windy area. 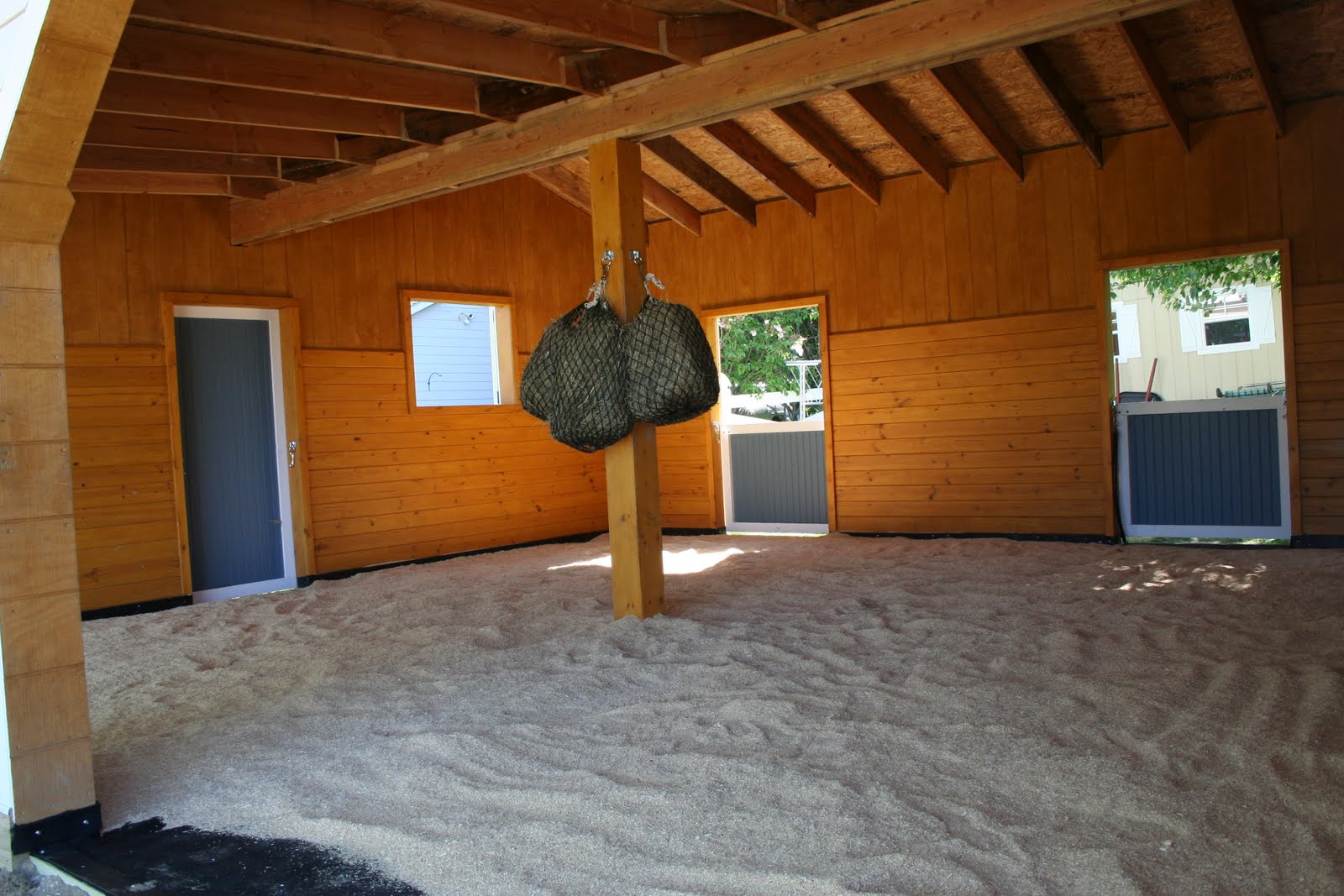 The one design I loved (that didn’t work) was a large 16×32 area with a 12’ opening at both ends of the long side. What I think it needed was maybe a 6’ wall midway, like it extended 6’ into the space and went to the ceiling. Horses could relax and eat w/o seeing each other but not feel anxious about eye contact

This run-in from Grey Horse Matters’ blog has always been something I’d like to build in the future! Based on their other photos, the more open side has two big openings side by side but maybe one could be closed if you’re in a really chilly/windy area.

If horses could choose, they would rather have this than individual stalls. That’s a human idea that they all want their own private room. They don’t, they want to be together.

If horses could choose, they would rather have this than individual stalls. That’s a human idea that they all want their own private room. They don’t, they want to be together.

Not really, it is a human idea that horse like to all be together.

Horses are individuals, some like another horse or two, some none, some like to keep to themselves, some be part of other horse groups.

All are adaptable within reason, to being a boss and stressing to keep all in line, or being an underling and stressing about not being run around, or living with others they can’t leave and have to get along anyway.

As long as we manage horse lives, we have to try to make them all as comfortable as we may, some keep alone for their safety or those of others, some with their friend if they have those, just whatever their ever changing circumstances may be.
Horse hierarchies tend to be fluid and recognizing and managing for that is in everyone’s best interest.

I saw this on FB a while back and it seemed like an ideal design for multiple horses if the shelter doesn’t need to be along a fenceline. 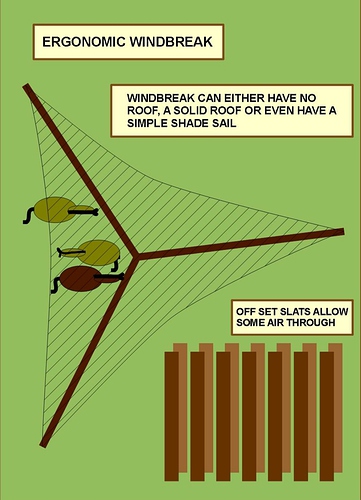 Oh I like that! That is exactly the sort of thing I need!

These are some of our horse pens with two sheds, each 30’ long x 12’ deep, 3/4" plywood lined 8’ high, put together and with added windbreaks on both sides.
There is a panel dividing them in the middle and an open 14’ gate in front of the panel.
Horses can use both sheds and pens and still have some separation from other horses while being with them and under a shed: 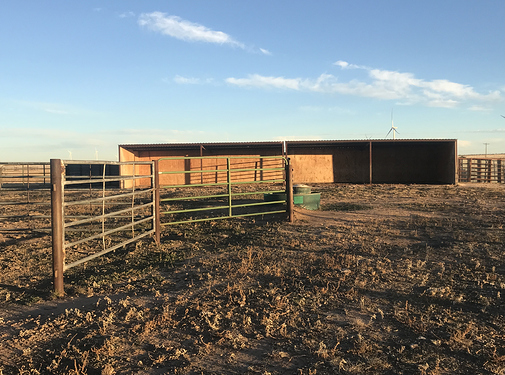 The barn where I ride has something similar to this - it has four compartments instead of three, so the interior walls make a + with a roof on the top of it.

We designed and built a shelter along the same lines as equinelibrium. Sorry, no photo but will try diagram:

Connect the vertical dots. We had a simple gable roof on it. We built it with concrete blocks
and it offered lots of out of the wind options so could serve 4 or five horses well. I think I like equinelibriums design better though.
.

They don’t, they want to be together.

Probably not true for my alpha mare and the bottom mare. I wonder if she gets much sleep other than the rare occasion when I have them in their stalls. Who knows, maybe she does when they all cram into the 12x12 space.

My “barn” is one 10x10 stall, an aisle, then two more 10x10 stalls with a sliding door between them. There is an entrance into the barn at the aisle and another at the last stall. The single stall is closed so nobody gets trapped and the rest is open. There is an 8 foot overhang off the front of the barn. Most of the time the three horses cram into the same 10x10 space, although they do occasionally seem to want their own space (like at feeding time). If I were to do it again, I’d make the stalls 12x12 and the aisle a bit wider, but I love this set up. It’s worked great for me over the last 10 years. It’s basic and low-budget but it works really well. 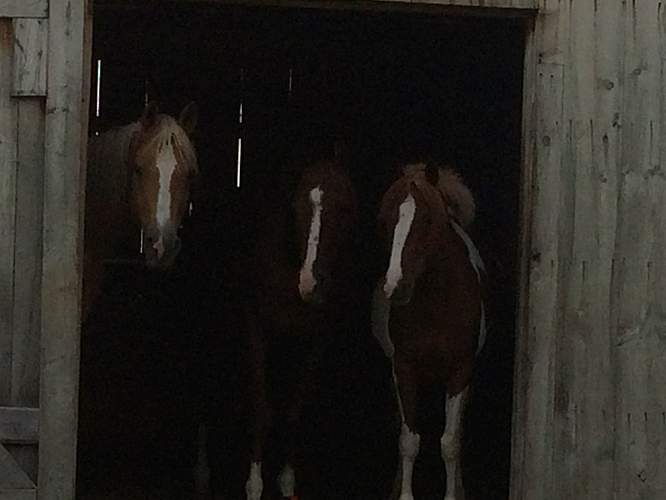 These are all great - thank you! I love the triangle windbreak concept but I don’t think we have the skills to build it to last in our difficult weather area

will likely stick with something similar to what @Bluey has done - I like the idea of dividing / not dividing as needed.

stalls with a sliding door between them.

I have been thinking about your post above and am very interested to try this design in my home barn. It certainly would be more efficient use of space vs separate run in areas and stalls.

I’m curious to know how wide the door openings are and what sort of hardware you used? Do both stalls have exits to the outside? How are the doors placed in relationship to one another? Any tips for introducing horses to the layout? Any thoughts / experiences with similar but different layouts you’d care to share? Detail pics/sketches? You’re welcome to PM me if you are so inclined

Here are some photos of the barn. The openings into the barn are 6 feet wide. One is in a stall and one is in the aisle. The stall that is on its own opens into the mini pen with a mini door. That stall doubles as a tack room. The stall boards and hardware came from kits so the doors are standard stall width. I just re-oriented the stalls so they open from the side rather than from the front. I staggered the stall walls in the barn to help break up any wind that might get in and it’s quite nice in there in the winter. In the summer I run fans in each stall and the horses hang out at the fans all day.

When I first built the barn, it was occupied by two horses that didn’t really get along but they managed fine with this set up, there was plenty of room to move around. For the last 8 years it’s been occupied by three horses who are very laid back and there haven’t been any problems. There have been a few times in the winter when the footing was too icy for turnout and my crew hate being locked in stalls so I used panels to close of the exits from the overhang, hung haynets all over and let the three of them wander. It was tight but they seemed fine with that for three or four days. I wouldn’t do that with other horses, but this group was happy with that.

Soon I’ll be going back to two horses (plus the mini who has her own pen) and then it works beautifully if I need to keep them in because I divide the area under the overhang so they each get a stall and a bit of the overhang. I also have gates hung in the middle of the overhang so I can make an outside stall in the area between the two doors. That allows one horse to be on stall rest and still have full use of the barn.

At feeding time one horse eats in the aisle and the other two are each in a stall. It didn’t take them long to figure out who goes where at feeding time and I never close a door. It was a bit chaotic shuffling them around to teach them who eats where but they figured it out pretty quickly. Occasionally they have to shuffle around still but they step aside to let each other through. 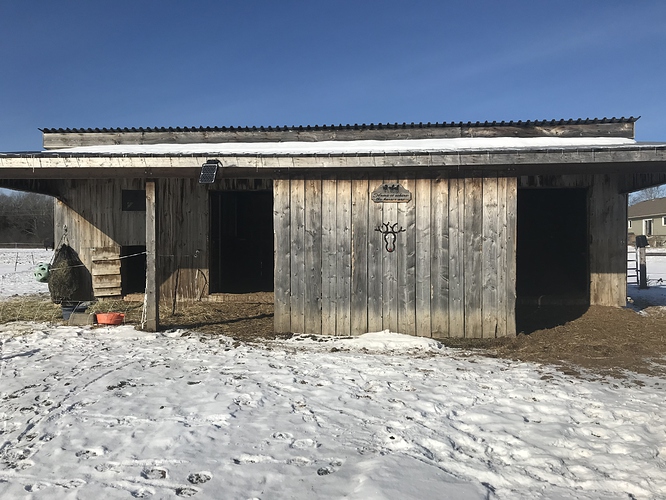 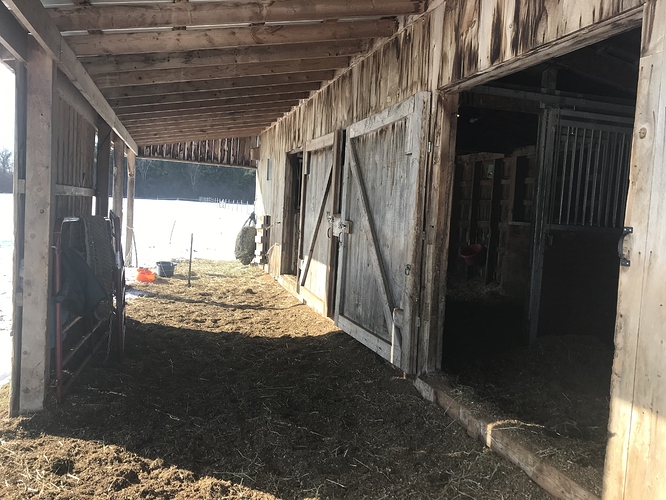 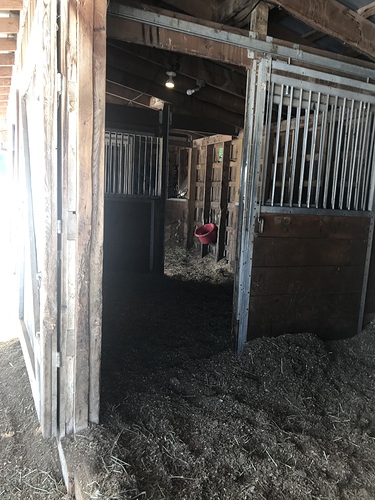 Thank you so much for sharing. I like how you have that section of wall on the edge of the overhang too. Looks like you’re getting maximum use out of your roof space!

I have two sensible geldings at home. I think they would be fine in that set up though I’d have to shut the piggy one in at mealtimes. I have two 15x20 “stalls” (pipe corrals) side by side that open in the back to my sacrifice paddock. One stall has an actual back with gate (that conveniently swings back flush against the sidewall) and the other is open space the full 15 ft in the back. If I can rig a door/gate/thingy in the divider wall, I’ll be golden. 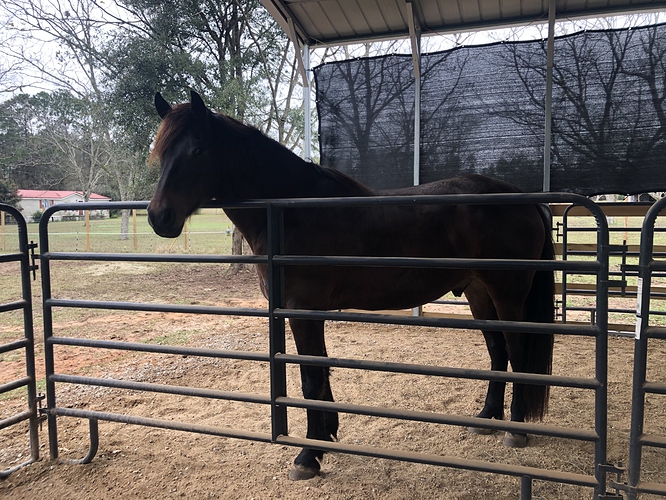 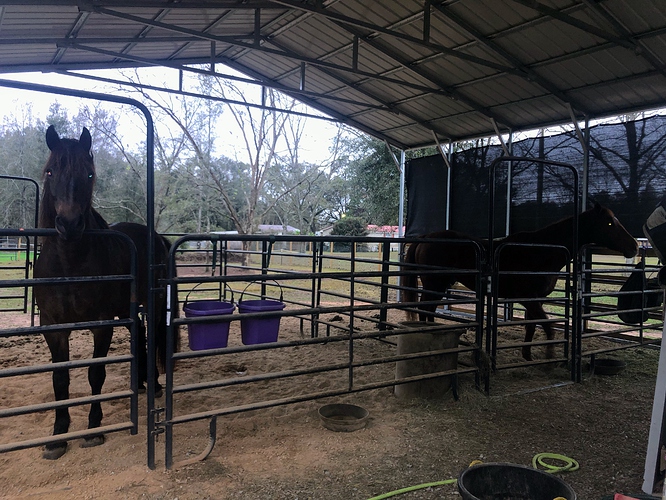 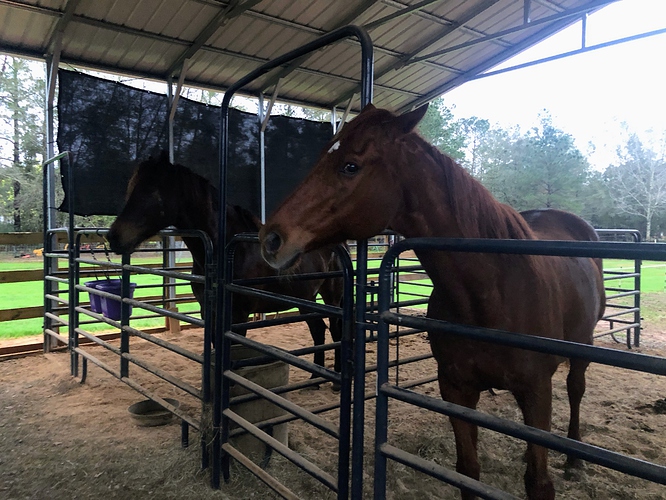 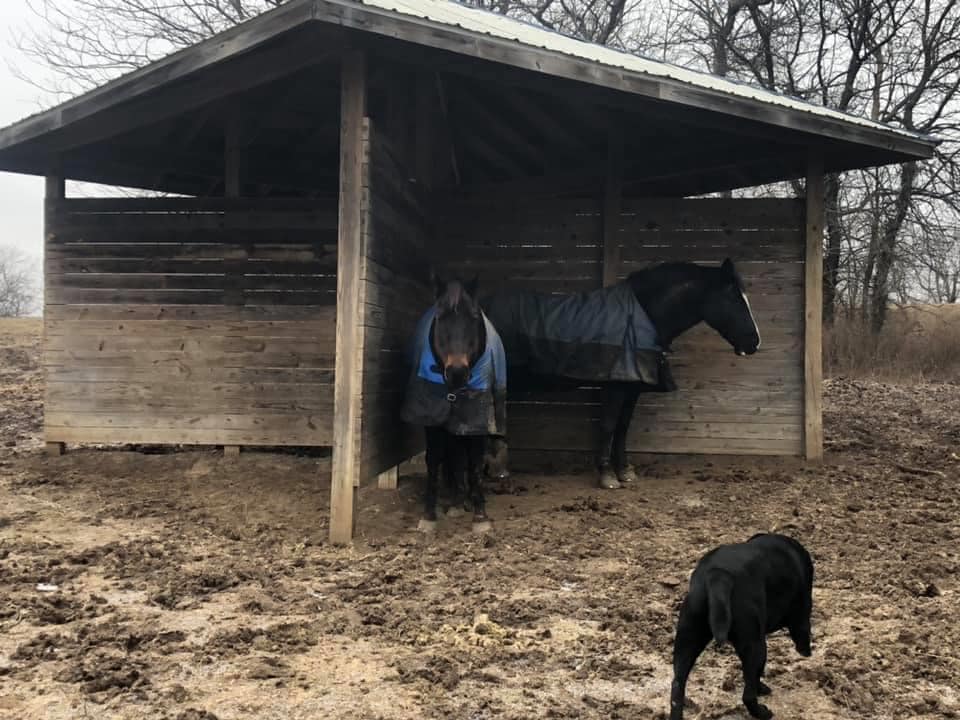 I love some of these creative shed ideas! I have a boring 12’ x 36’ run-in shed that works well. I split it into 12’ x 12’ and 12’ x 24’ with removable boards so that I can subdivide my dry lot when needed. Right now one horse has access to the smaller side and two the larger side, but when it’s all shared I just leave the boards up and sometimes find two horses chilling in the smaller side. Its only special features are outlets for fans and five windows that I close in the winter and leave open the rest of the year. 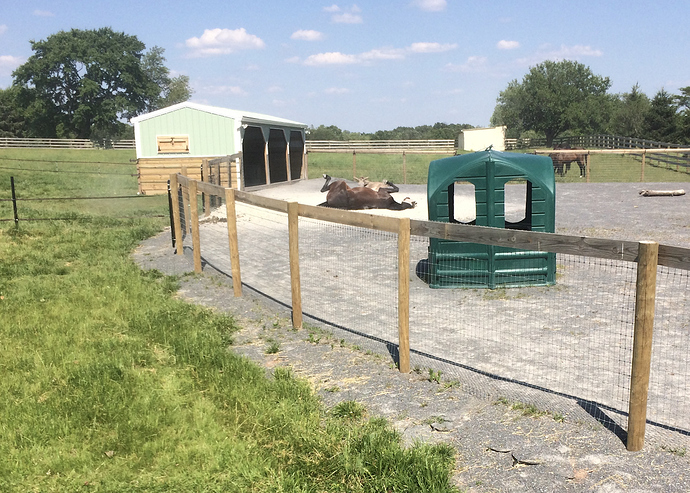 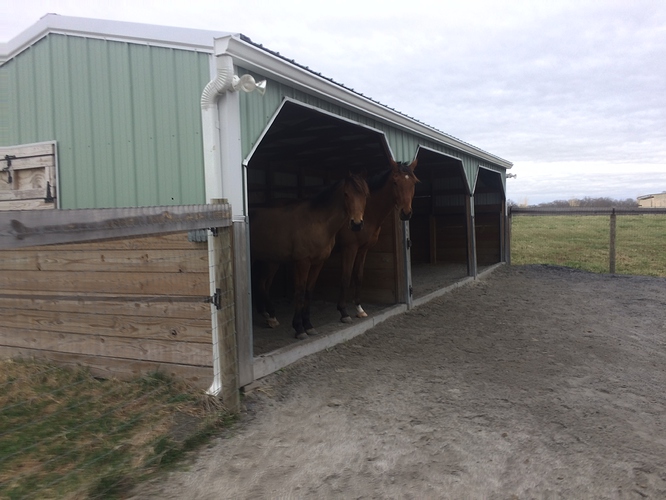