Does anyone in NY racing have more information on these horses? The stallion First Cornerstone has really interesting bloodlines! I can’t find any info on where he is standing now.
(11) Facebook

I can’t help but wonder if First Cornerstone died in all this mess. It seems the breeder died in 2019: 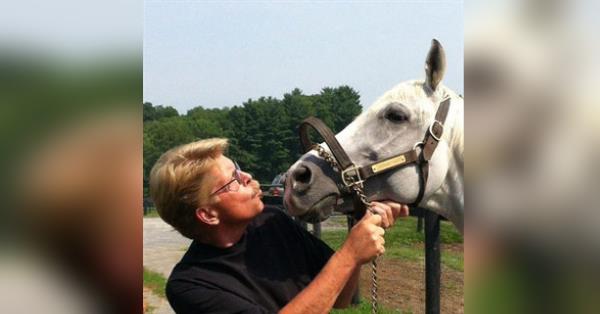 I wonder what happened between now and then to lead us to this.

Those are some nice horses in need of a soft landing. I hope people show up.

ETA: First Cornerstone only covered TB mares in North America is 2016 and 2017. He only had 12 live foals out of 24 matings, all born in 2018. No North American activity since. Maybe he died, maybe he was sold for non-TBs or sold overseas, or maybe he was gelded since he didn’t seem to be particularly virile looking at his record.

I have seen FB posts showing the horses well cared for during the interim time. The sale is for the dissolution of a partnership, but surprising they are not going through a TB sales auction rather than a local one. Quite a few don’t have their JC papers processed, so I don’t think the stallion had any reports sent to JC. Just wondered if there were any local breeders who had more info on the horses. I hope they do get interested buyers for all of the horses.

I should not have looked at that link - too many nice mares there. I hope they all get soft landings. Go Tell Daddy has such a nice look.

They were obviously cared for up to a point, but many are looking rough now.

They probably aren’t going through a TB consignor because not many are worth anything now. Don’t get me wrong, these were nice horses at one point. But several of the mares are 20+ years of age. The young horses missed their window to race and have paperwork problems. The other mares appear to have all been open for years, which hurts their value.

They are really nice sport prospects for riding and breeding. I shared the heck out of the FB album hoping to garner some more interest.

ugh, that’s so unfortunate. There are several I would snap up in a heart beat. Lots of commercial black type, but as Texarkana pointed out, their recent production hurts.

Anyone going? I have venmo and am notoriously impulsive!!

Get in touch with Colette Duddy (I think) at Second Chance Thoroughbreds in Spencer, New York (on Facebook) if you are serious. She will probably attend in person.

Some nice Giant’s Causeway and Tapit bloodlines. But some older mares who will need someone to step up for them. I love some of the auction comments “can we get a riding video”? I don’t think people understand most of these horses have never been ridden anywhere but on the track. There is a Facebook group that has been started to follow the sale.

Would you mind linking it?

Thanks for contact info. I am interested in a couple of the horses. I tried to call a number with the farm, but no one has returned my call. I was hoping to get more info on the horses.

This is what I found

I would follow the Facebook link posted here. I would also try calling the auction house directly, though I am not sure if that would bring much joy.

There are groups involved, but Second Chance Thoroughbreds is not directly involved with this. I am local and respect this rescue. They are sensible in their rescue efforts: stay within their means, work hard to give the horses what they need to move on to a new life post-racing, and, when they can, provide a soft landing for thoroughbreds at auction. So Colette is familiar with the Unadilla auction and will probably, I am guessing, be there tomorrow.

This is what I found

This looks like an existing group where the sale has been posted a few times, rather than a new group created to follow the sale? Good group to join for NY breds, but not sure it’s what @kimball1 was talking about.

@kimball1 would really like to know what group was created to follow the sale specifically. Have looked through a lot of comments and haven’t seen anything mentioned.

For anyone looking for a rescue contact, Unbridled Thoroughbred Foundation seems to be leading the charge there:

(I know nothing about this group, have just seen them actively fundraising.)

Any updates on how this is going? Turnout? Prices? I imagine it’s wrapping up about now…

There are so many of those mares I would have loved to have taken in. It’s so hard to remember you can’t save ‘em all.

I couldn’t go in person, but a local farm owner had posted on Facebook that he would take in horses for quarantine for anyone who was bidding by phone. I contacted him and was planning on bidding. The horses apparently looked much worse at the auction than they had even in the photos posted before the sale. The four and five year olds were not halter broken. Fortunately, there seemed to be a good turnout, and I was quickly outbid, so did not buy anyone. The farm owner said that it looked like most had gone to good homes. Unbridled may have also picked up some as well.

It seems the auction company has taken down the post now.

I saw a happy update about the two 24 year olds:

I’m not surprised to hear it was worse than it looked, because it did not look good to begin with. These were obviously once cared for horses who got screwed over in this mess. Thankfully it didn’t drag on any longer. I just hope they all got soft landings. It’s good to hear bidding was active.

I attended in person last night. It was my first auction, so I have no real point of reference, but I would say it was worse than I expected. There were a fair amount of injuries and fat legs, a few that had been pretty beat up in transport or at the auction house, anyone under 6 was not halter broke, many of the pens had no food or water, and everyone was VERY obviously drugged.

However, there was a very active and fairly organized group of rescues and private buyers who coordinated to make sure we were not bidding against each other. The only goal was the keep as many as possible out of the slaughter pipeline.

I bought two, the Hat Trick mare and her 3yo filly. I had a gelding by Hat Trick that I lost in a tragic field accident a couple years ago, and I needed this mare and her baby. I still can’t believe it worked out for me because there was plenty of interest in the mare for breeding programs, but truly everyone’s goal was for these horses to have a safe landing and 5* homes. So by some miracle and act of benevolence, the interested buyers were willing to step aside for me to bid on her and turned their resources to other mares. Her baby was the only 3yo in the lot and, I’m guessing, the least handled out of all of them. But they loaded and travelled beautifully last night, and are quietly settling into their new life.

The mare is sweet sweet sweet and a total babysitter type, so if she ends up being nothing more than a calming influence on my herd then I will be happy. I didn’t think much of the filly on first glance (she was scared and tucked into the herd, so it was hard to get a good look), but she is well balanced and once her condition improves and she grows up a little I think she’ll be a nice little prospect for me.

Prices were between $1000 and, I think, $2700 hundred was the highest for one of the two geldings in the lot. Nothing went for under $1k. There was a fair amount of phone bidding.

There was at least one known slaughter broker in attendance. He bought 5 by the end of the night, including one of the 24 year old mares - BUT as someone posted above, both of the aged mares are now safe, so there must have been some brokering done by the rescues after the sale.

Unbridled bought 4 last night and I believe were going back for more today,
I believe they were the ones who secured a safe home for Apocalyptic. They were the lead on organizing the effort and did a nice job.

Law enforcement was in attendance to try and ‘enforce’ the NYS law about not selling TBs and Standardbreds directly to slaughter. The friend I attended with overheard the NYS trooper in attendance speaking with the slaughter broker and telling him to expect welfare checks on the horses he bought. I don’t want to speculate further on that, just reporting what was reliably reported to me.

Anyway, that’s the rundown! It was quite an experience. I’m so glad I went and was able to get my girls - and, and all things considered, it was a good experience for me to jump into the front lines for the first time.

I am so happy to hear this! Congrats on your new additions.

What a phenomenal effort by the community.

Thanks for your post (very interesting) and for buying 2 of the horses. Sounds like it was a good experience and people were working together to make sure that most of the horses got good homes.

Best of luck with the girls. Would love to see a picture of them!

Of course! I forgot the most important part. 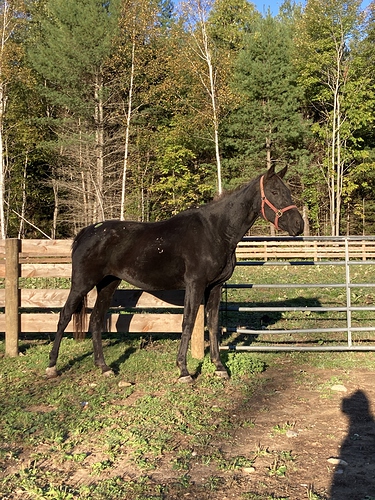